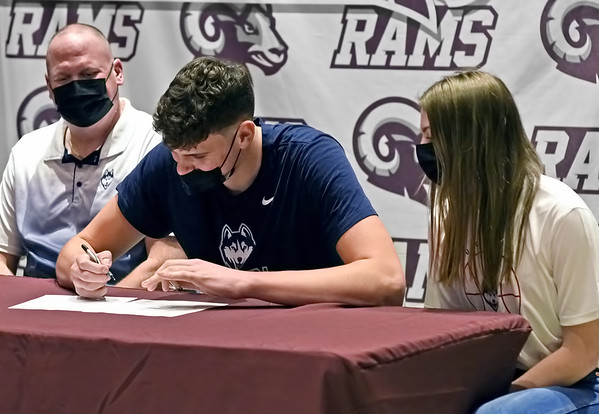 Donovan Clingan, center, signs his National Letter of Intent to play basketball at the University of Connecticut. | Laura Bailey Buy this photo
Published on Thursday, 11 November 2021 12:25
Written by MATT HORNICK

BRISTOL - In just about every way, Wednesday was a normal day for Donovan Clingan. He woke up, worked out, went to school and tried to avoid hitting his head on door frames, the same as he does most days of the week.

While no one in Clingan’s senior class at Bristol Central High School shares the challenges he faces with being more than seven feet tall, he does not have to engage with one of the challenges currently plaguing many of his classmates: selecting where to go to college. But that is partially because he started his college process way before they did.

Clingan, the reigning Gatorade Player of the Year for boys basketball in Connecticut and twice-reigning MaxPreps state player of the year, verbally committed July 2 to play basketball at the University of Connecticut, closing out a three-year recruiting journey and freed him of the pressure to make a decision during his senior year.

After school on this otherwise benign Wednesday, however, the Rams’ basketball star became the man of the hour as the auditorium at his soon-to-be alma mater filled with people from all over Bristol and beyond to celebrate with him as he signed his National Letter of Intent to officially join the Huskies next year.

“To officially be a Husky means a lot,” Clingan said. “I’ve been looking forward to this day since I could pick up a basketball. I’ve worked hard for this and I’m proud of myself, but I have to realize that this is not the end, it’s just the beginning and I have to keep working.”

Clingan chose UConn after receiving scholarship offers from more than 20 Division I programs. He planned visits to eight schools over last summer, but canceled his last four trips after going to Storrs because he knew right then he found his for four years.

“We’ve all known he was going to the University of Connecticut, but today is signing day, it’s official,” Central basketball coach Tim Barrette said. “Now in Donovan’s eyes he can continue to work on his craft and get in the gym with us in three weeks to prepare for hopefully a very memorable season.”

Clingan sat at a table set up in front of the stage in the auditorium, flanked by his father and sister with a wallpaper of Bristol Central logos behind them, as Central head boys basketball coach Tim Barrette directed the proceedings.

The 17-year-old was showered with compliments as Bristol Athletic Director Chris Cassin, teammate and friend Carson Rivoira, Bristol Central principal Pete Wininger and Barrette each addressed the podium to share why Donovan is so important to them and this community and how he’s grown in the time they have known him.

“Just to know that I have this many people on my side supporting me means so much to me,” Clingan said. “It’s also one of the reasons why I stayed here. The family atmosphere, everyone is supporting me, everyone is showing me love. I can’t turn that all down, I can’t leave that, it means a lot to me.”

Clingan stood up to speak, but not before putting pen to paper and solidifying his collegiate commitment with a signature. Finalizing that one of central Connecticut’s proudest sons will be staying close to home for at least another four years.

“He wants to be in Connecticut,” Joe Chatman, head coach of Team Spartans, Clingan’s AAU team, said. “He had some major Big 10 offers, but he wanted to be here. For him, it was way more important to be in front of his family and his friends than anything.”

After three seasons of varsity basketball, Clingan is a two-time all-state honoree and three times all-Central Connecticut Conference and was a finalist for national Gatorade Player of the Year in 2021. He has 1,421 points in his career along with 1,002 rebounds, which is 80 short of the school record currently held by his mother, Stacey.

Despite not having a state tournament last season, Clingan led his team to a 15-0 record and CCC Championship that earned them the unofficial title of best team in Connecticut according to GameTime CT poll. He averaged 36 points and 26 rebounds in Central’s three conference tournament games as the Rams took down three of the best teams in the state in five days.

With those memories still fresh and one last chance at a state tournament run, Clingan made it clear his goal this year is to go undefeated and run the table all the way to a state championship.

“A signing day like today doesn’t change who he is,” Barrette said. “It’s never changed or waivered how Donovan reacts around his teammates and for this program. The hardest thing we’re going to have to replace is his leadership that he’s given me for the last four years.”