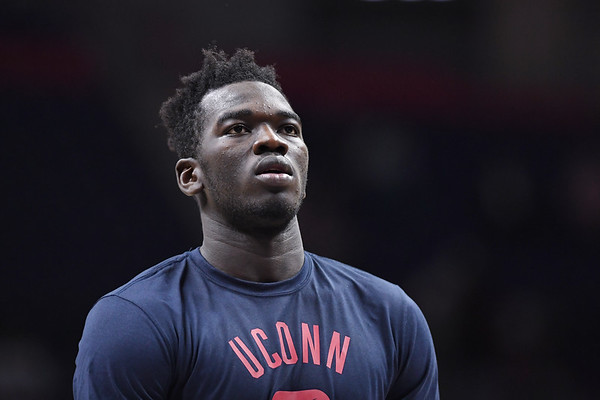 STORRS -- The UConn men's basketball team might have a rough month. Center Adama Sanogo certainly will.

UConn coach Dan Hurley said Friday before the Huskies' practice that his star sophomore center will be out at least two weeks and likely more because of an abdominal injury he suffered in Tuesday's win over Maryland-Eastern Shore.

“We’re still getting a sense of what that is exactly. We’ll probably know more in the next couple days,” Hurley said. “But right now it’s looking like a couple weeks to possibly longer, potentially longer than that, or maybe longer than that. We just don’t really know the extent of that.”

Sanogo is averaging 15.6 points and 6.3 rebounds through the Huskies' first game this season. UConn (7-1) takes on Grambling State Saturday.

Sanogo's injury is something akin to an abdominal strain, UConn officials said. Hurley said he thought it might be an "abdominal tear."

The Huskies were already dealing with a wrist injury to senior guard/forward Tyrese Martin. Martin missed the Eastern Shore game.

“Tyrese looks like a two- to a four-week window with him,” Hurley said.

UConn will be without both men Saturday and likely at least for games next week against West Virginia and St. Boneventure.

Sanogo already had an MRI performed on his abdomen, Hurley said, but is slated to meet with more doctors soon.