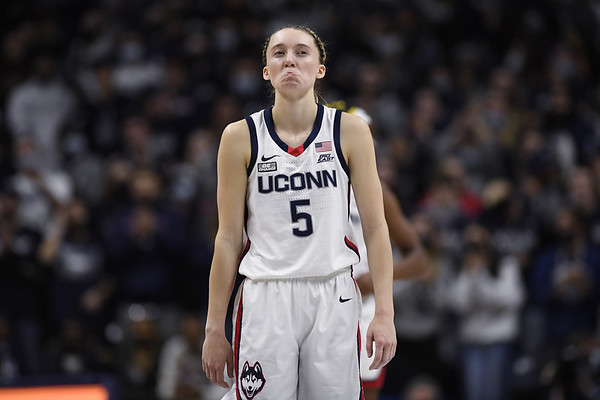 Most fans of the UConn womenŌĆÖs basketball team likely never heard of a tibial plateau fracture until Tuesday.

But in the day since the diagnosis of the left leg injury suffered by sophomore guard Paige Bueckers against Notre Dame Sunday was announced by the school, tibial plateau fracture has just as likely become a part of the fansŌĆÖ conversations.

According to┬Āhealthline.com, a tibial plateau fracture ŌĆ£refers to a break or crack in the top of the shin bone, at the knee. It involves the cartilage surface of the knee joint. This joint helps supports your body weight, and when it is fractured, it is unable to absorb shock.ŌĆØ

The reigning national Player of the Year is looking at an estimated time of recovery of 6-8 weeks.

ŌĆ£The tibia is an important structure that supports your weight during activity,ŌĆØ said Carrie Krieg Deisenroth, a certified athletic trainer and graduate of Central Connecticut State University. ŌĆ£When it sustains a fracture, then itŌĆÖs important to have little weight bearing initially so that the fracture may begin to heal. Also, a lot depends on how bad the fracture is and whether itŌĆÖs displaced or not. Likely theyŌĆÖre in a brace locked into full extension.

ŌĆ£The length of rehab depends on whether itŌĆÖs displaced or not, and whether thereŌĆÖs surgery or not. Non-displaced would mean a quicker. With surgery, then likely at least 4-6 months for the earlier stages of recovery.ŌĆØ

The UConn announcement indicates no surgery is necessary.

In any case, Geno Auriemma emphasized that BueckersŌĆÖ return will not be rushed.

ŌĆ£Obviously, weŌĆÖre all extremely disappointed for Paige and that she suffered this injury,ŌĆØ the UConn coach said in a statement. ŌĆ£It would be really hard to describe how much basketball means to Paige and how much her teammates mean to her. Not being able to do the thing that she loves to do, to be there for her teammates, is really difficult for her.

ŌĆ£WeŌĆÖve had players get injured in the past and my philosophy here is IŌĆÖm not interested in how fast we can get someone back. IŌĆÖm interested in whatŌĆÖs best for them long term. Every decision made will prioritize whatŌĆÖs best for Paige and her career. Everyone involved with this program will be there to support Paige through her healing process.ŌĆØ

Bueckers fell to the floor with 38.5 seconds left Sunday holding her left knee following a misstep while bringing the ball up the court. She was helped to the bench by teammates Evina Westbrook and Amari DeBerry and afterwards helped off the court by teammate Azzi Fudd and athletic trainer Janelle Francisco.

An MRI and a CT scan revealed the tibial plateau fracture.

ŌĆ£Her knee went into a valgus position while flexed (valgus is like knock knee),ŌĆØ Deisenroth said. ŌĆ£If the joint goes into a valgus or varus (bow legged) position then thatŌĆÖs the rotational force thatŌĆÖs going to cause the grind at the joint causing the fracture.

ŌĆ£ItŌĆÖs usually something a bit more traumatic than just a jog down the court.ŌĆØ

Bueckers was basically dribbling out the 30-shot clock on what figured to be the HuskiesŌĆÖ last possession. There was no contact with a Notre Dame defender and the Irish were not contesting what Bueckers was doing.

In the early stages of rehab, Deisenroth said, the main goals are to decrease pain and inflammation, and increase range of motion through active and passive approaches.

Having Francisco and UConnŌĆÖs other athletic trainers on campus should help Bueckers through the later stages.

ŌĆ£An athlete can improve quicker due to daily rehab and constant supervision direction,ŌĆØ Deisenroth said. ŌĆ£The recovery time can vary in the latter stages depending on healing, patient compliance, availability of equipment and supervision.ŌĆØ

The UConn announcement did not say if there was a bone bruise or displacement in the left knee.

ŌĆ£If there is the circumstance where there is bone bruise and a small, non displaced fracture, she might be able to participate in low-impact activities without having any problems with pain or swelling,ŌĆØ Deisenroth said. ŌĆ£She can then maintain her cardio levels so as to not have to worry about that aspect once the knee is healed and she can return to activities. If thatŌĆÖs the case then likely a minimum of six weeks is usually necessary to allow the fracture to completely heal so that there is no risk of a re-injury.

Third-ranked UConn visits Georgia Tech Thursday and then takes on UCLA Saturday in the Never Forget Tribute Classic in Newark, New Jersey. It will then play only one game in a 17-day stretch - Dec. 19 against Louisville at Mohegan Sun Arena.