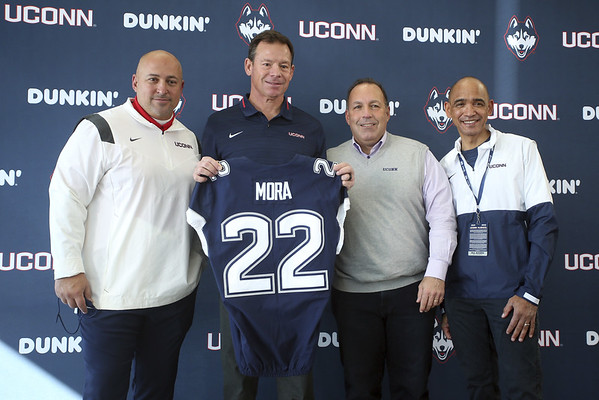 STORRS - The metaphorical wall that Jim Mora hopes to build around Connecticut to keep the state‚Äôs football talent home and playing for UConn has begun to take shape.

Mora revealed his first recruiting class as the Huskies head coach Wednesday, a group that is highlighted by Gatorade state player of the year Victor Rosa, a running back from Bristol Central. UConn‚Äôs Class of 2022 also includes four players from Connecticut prep schools, three from Loomis Chaffee in Windsor and one from St. Thomas More in Oakdale.

‚ÄúWe‚Äôre going to do the best job we possibly can in this state and this surrounding area,‚Äù Mora said Wednesday morning from the Burton Family Football Complex. ‚ÄúWe‚Äôre not going to concede to anybody.‚Äù

Mora, the former head coach at UCLA, the NFL‚Äôs Atlanta Falcons and Seattle Seahawks, is new to the Nutmeg State but is seemingly embracing it.

‚ÄúThere‚Äôs a tremendous amount of pride in this state for football. That has been very apparent to me in the people I‚Äôve talked to,‚Äù Mora said. ‚ÄúAnd I believe it as well. I take pride. This is my state now as well. This is my school now as well.‚Äù

‚ÄúThe first week I was on campus he came over with his mom and his dad. We went to a basketball game together,‚Äù Mora said. ‚ÄúI spent a lot of time with them, developed a tremendous relationship, had a chance to go see him play in person.‚Äù

‚ÄúWhen you watch this guy‚Äôs film, there really isn‚Äôt anything that he can not do. We plan to use him as a running back, slot, a guy that we‚Äôre trying to get matchups (for). We‚Äôre going to try to get him matched up on a linebacker, a safety,‚Äù Mora said. ‚ÄúWe want to get him the ball in space so he can use his speed, his athleticism, his quickness.‚Äù

Rosa may not be the biggest of running backs, but that‚Äôs not a major concern for the coaching staff.

‚ÄúDo we want him to be a guy that runs it between the tackles 30 times a game? No. But we don‚Äôt want any of our backs doing that. That‚Äôs just not practical any more,‚Äù Mora said.

The Huskies welcomed a couple more players after Mora discussed the class with reporters early on Wednesday.

Matthew Hoffman, a 3-star tight end from Cheltenham, Pennsylvania, who had originally committed to Virginia Tech, signed with the Huskies later in the day. Hoffman is listed as a defensive lineman by UConn.

In addition, the Huskies picked up a verbal commitment from a quarterback. Cale Millen, a transfer from Norther Arizona who originally committed to Oregon out of high school, announced he was going to join the Huskies.

Lou Spanos has had two different jobs with the UConn football team, first as the team‚Äôs defensive coordinator and later as the interim head coach. He lost the latter job but is returning to the former.

UConn announced late Wednesday that Spanos would serve on Mora‚Äôs staff as defensive coordinator. Spanos was in the same role with Mora at UCLA from 2012-13.

‚ÄúLou possesses and outstanding football mind, and he was a terrific defensive coordinator on my staff for two years at UCLA,‚Äù Mora said. ‚ÄúThe job Lou did for UConn football in 2021 was admirable and it‚Äôs clear that he has a passion for this team and a great relationship with our student-athletes. I‚Äôm looking forward to getting back to work with Lou.‚Äù

UConn running back Kevin Mensah, the only player in UConn history to run for 1,000 yards in consecutive seasons, has entered the transfer portal.

A native of Worcester, Mensah is No. 4 on UConn‚Äôs all-time rushing list, but his role was greatly diminished in the 2021 season as freshman Nate Carter became the team‚Äôs featured back.

Mensah was honored on UConn‚Äôs senior day and his departure is not a surprise. He has one year of eligibility remaining.

‚ÄúWhen you come into a new situation I think you have two choices. You can concede the class a little bit and start building toward the future. Or you can attack it. You can say ‚ÄòListen, we‚Äôre not going to point toward the future, we‚Äôre going to point toward now,‚Äô ‚Äù Mora said. ‚ÄúThat‚Äôs what we did. ‚Ä¶ At no point did we concede. We had a lot of ground to make up. New relationships had to be built, new trust had to be built.‚Äù