Adamec: Ducharme gets defensive for Huskies 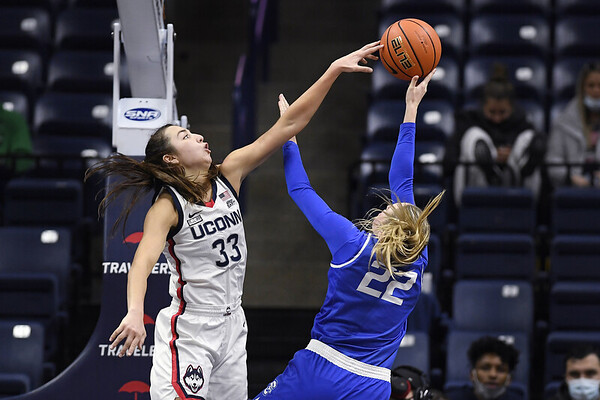 STORRS - Caroline Ducharme has spent much time since joining the UConn women‚Äôs basketball team in late spring talking about her need and desire to improve defensively.

Who knew Creighton was listening?

On the Bluejays‚Äô first possession Sunday, guard Tatum Rembao went at Ducharme but instead of looking for a shot passed out for a 3 pointer that was missed by Lauren Jensen. Two possessions later, though, guard Payton Brotzki - who ranks 10th out of the 11 Creighton players in scoring at 2.5 points per game and is in the starting lineup for her ballhandling and defense - drove into the lane, pulled up, and scored over Ducharme.

A pattern was established. But as the action went on, it would prove to be less and less effective.

Ducharme was a force on the offensive end as expected for the 11th-ranked Huskies, finishing with a game-high 17 points in a 63-55 Big East win at Gampel Pavilion. But the freshman guard was a difference-maker on the defensive end for the first time as UConn (7-3, 2-0 Big East) held the Bluejays to a season-low in points, 15 under their average coming in.

‚ÄúI was happy with it,‚Äù Ducharme said. ‚ÄúSince June it‚Äôs been something I‚Äôve been focusing on, trying to keep my player in front of me. I‚Äôve worked on it practice, after practice, in extra workouts, and stuff like that. Obviously I still have things to improve on it, but it is a good start.‚Äù

Creighton came in shooting 44.0 percent from the floor and hit 37.1 percent (31.3 percent in the second half) overall Sunday. The Bluejays were 5-for-25 from 3-point land (20.0 percent) after coming in hitting 37.0 percent from behind the arc.

Ducharme, who added five rebounds, two steals, and a career-high three blocked shots, had plenty of help from her teammates on the defensive side. But knowing she can get the job done there will help keep her on the floor, particularly when outcomes are being decided.

‚ÄúShe was real good today defensively in a lot of different ways,‚Äù UConn coach Geno Auriemma said. ‚ÄúShe‚Äôs worked really hard on it and has gotten much better at it. I think that‚Äôs going to keep getting better hopefully as her season goes on and her career goes on. And hopefully she keeps making shots.

‚ÄúI think the biggest area for her has been not getting lost whether it‚Äôs which switches are going on or what cuts are happening, over-helping at times. Some of it is experience. You just play enough basketball at this level, you learn to read offenses better. It just takes time. But she is such a competitor. She competes, and she wants to be really, really good, so whatever she sets her mind to it is going to get done. I have no doubt about that.‚Äù

In the Huskies‚Äô loss to Louisville on Dec. 19, Ducharme lost Cardinals‚Äô guard Hailey Van Lith twice at the 3-point line in the fourth quarter. Van Lith, who was shooting 15.4 percent from behind the arc at that point, hit both to turn a one-point deficit into a five-point advantage and the Cardinals led the rest of the way.

The 6-foot-2 Ducharme was able to use her length to challenge the Bluejays on the perimeter as well as when they attacked her going to the basket.

She probably played more defense in her 38 minutes on the floor Sunday than in five years at Noble and Greenough School where was a two-time Massachusetts Gatroade Player of the Year and a 2021 McDonald‚Äôs All-American.

‚ÄúI wouldn‚Äôt say in high school that you didn‚Äôt have to play defense, but it was easier to play it in high school,‚Äù Ducharme said with a smile. ‚ÄúHere everyone is bigger, stronger, faster so you have to have more focused on it.‚Äù

In her three games in the starting lineup following injuries to guards Paige Bueckers and Azzi Fudd, Ducharme is averaging 18.3 points in 36.7 minutes.

But if you can play defense, too, Auriemma has shown in his Hall of Fame career that he will play you, a lot.

‚ÄúComing here in June out of high school, she had a long way to go strength and conditioning-wise,‚Äù Auriemma said. ‚ÄúSo she made a tremendous amount of progress right away in that area.

‚ÄúHer competitiveness or competitive spirit allows her to get better. She doesn‚Äôt dwell on what she can‚Äôt do.‚Äù

Creighton challenged Ducharme Sunday and she showed what she can do.

It was just what the Huskies needed.