After loss, Huskies get defensive 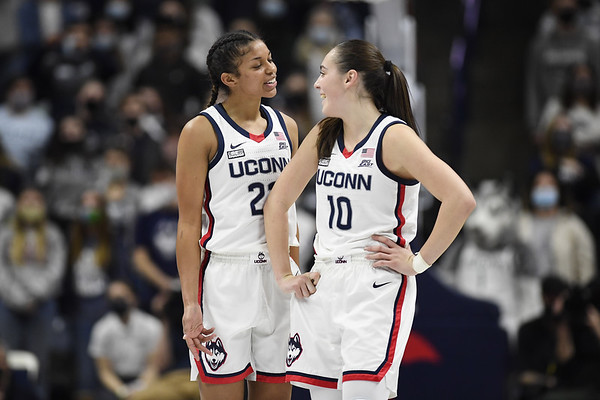 STORRS - Senior guard Christyn Williams won‚Äôt be back in the lineup until next week, it‚Äôs hoped, for the UConn women‚Äôs basketball team.

Freshman guard Azzi Fudd, it‚Äôs hoped, may not be far behind.

That‚Äôs a lot of offense missing from the Huskies‚Äô lineup. But even if the short-handed Huskies can‚Äôt score like they‚Äôve done for decades, there‚Äôs no reason they can‚Äôt play defense at a high level.

It proved to be a winning formula against Seton Hall Friday night.

UConn limited the Pirates to 26.4 percent shooting and 31 points below their season average in rolling to an easy 71-38 Big East win at Gampel Pavilion.

‚ÄúI think we had a really good defensive plan coming into the game and we stuck to it,‚Äù UConn sophomore guard Nika Muhl said. ‚ÄúEveryone was helping each other. We had great communication today.‚Äù

Seton Hall (8-8, 3-5 Big East) hasn‚Äôt had the kind of season it has wanted and it misses a glue player like East Hartford native Desiree Elmore, who moved on to Rhode Island as a graduate transfer in the spring. The Pirates were picked for third in the Big East preseason poll and with players like Lauren Park-Lane and one-time UConn player Andra Espinoza-Hunter, they can put up points.

Or so they were hoping.

Muhl, who came in averaging 1.9 points per game, scored a season-high 11 Friday night and her total matched the combined effort of Park-Lane (6) and Espinoza-Hunter (5). Park-Lane came into the game third in the conference in scoring at 18.1 with Espinoza-Hunter not far behind at 16.7. They combined to make only 2-of-19 shots.

The Huskies (10-4, 5-0) didn‚Äôt light it up either, finishing at 41.2 percent from the floor. But they did dominate in points in the paint (38-8) and in second-chance points (21-2) as expected. They also held a 15-3 advantage in points off of turnovers and scored all 12 of the game‚Äôs fast-break points as they rebounded from Monday‚Äôs loss at Oregon.

Speaking of rebounding, the Huskies also dominated the glass to the tune of a 53-25 advantage.

‚ÄúWe were all in a bad mental state after that game and we said to ourselves, ‚ÄòThat can‚Äôt happen again,‚Äô ‚Äú Muhl said. ‚ÄúI feel like we really played as a team today. Everybody contributed and did everything they could do. This was the result.‚Äù

Between Bueckers, Williams, and Fudd, that‚Äôs 40-plus points per game on the sidelines. UConn had balanced scoring Friday night with four in double figures.

The defense made it a rout.

‚ÄúThose points are gone for now,‚Äù UConn coach Geno Auriemma said. ‚ÄúThat doesn‚Äôt mean that the game can only be played at one end of the floor and only one way. You have to be able to play basketball in a way that your offense and defense complement each other.

‚ÄúI thought we played more as a group and as a unit today than we have. We were much more cohesive today than we were on Monday. That‚Äôs a big reason we looked so good. The communication was good today and the chemistry was better. Whatever the game plan was, we got it right almost the entire game.‚Äù

The Huskies also got solid guard play Friday night, something that was missing out on the west coast.

Getting more from Muhl would help until at least the cavalry arrive.

‚ÄúShe‚Äôs the floor general,‚Äù UConn senior center Olivia Nelson-Ododa said. ‚ÄúShe gets it done, especially on the defensive end. She‚Äôs always talking to us, always communicating with us with what we need to do. That helps us a lot.‚Äù

The Huskies have a quick turnaround as they‚Äôll visit St. John‚Äôs Sunday with an opportunity to try and build momentum against a struggling opponent with a showdown at No. 1 South Carolina on deck Thursday.