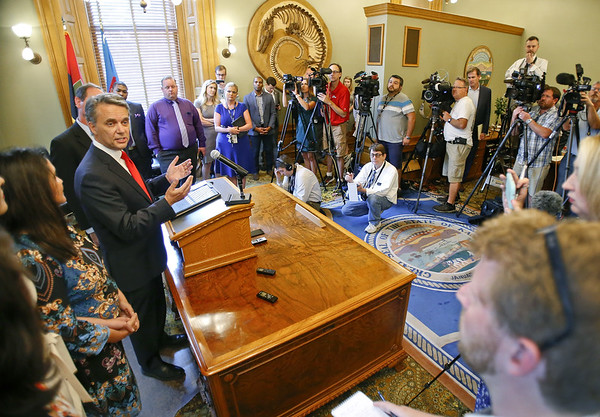 TOPEKA, Kan. - Kansas Gov. Jeff Colyer said Friday that he believes Secretary of State Kris Kobach has told counties as part of his job as the state’s top elections official not to accept some legitimate ballots in their hotly contested Republican primary race.

Colyer, who already has accused Kobach of giving county election officials guidance “not consistent with Kansas law,” said Friday on Fox News that he is worried that some mail-in ballots in the governor’s race are not being counted as required. He said he is “not entirely” comfortable with the counting of remaining votes.

Kobach spokeswoman Danedri Herbert said Friday that Kobach would respond later in the day to Colyer’s demands, including a letter Colyer sent telling Kobach to stop advising stop advising county election officials and allow the state’s attorney general to take over that role.

Kobach pledged Thursday night on CNN that he would stay out of further vote counting, but it wasn’t clear how far that promise went. Colyer wants assurances that Kobach will not advise county officials as they count votes, not just that he won’t be involved in counting them.

The secretary of state’s role in the actual counting of ballots is limited: His office provides guidance, compiles statewide vote tallies and provides general supervision. Kobach on Thursday night said staying out of further vote counting would be “symbolic” and even “pointless” but pledged to do it anyway.

Kobach led by 121 votes out of more than 311,000 cast after discrepancies were found Thursday between two counties’ totals and those reported on the secretary of state’s website. More changes and a new statewide tally in the race were expected Friday, with late-arriving mail-in ballots counted. Counties have until Aug. 20 to finish.