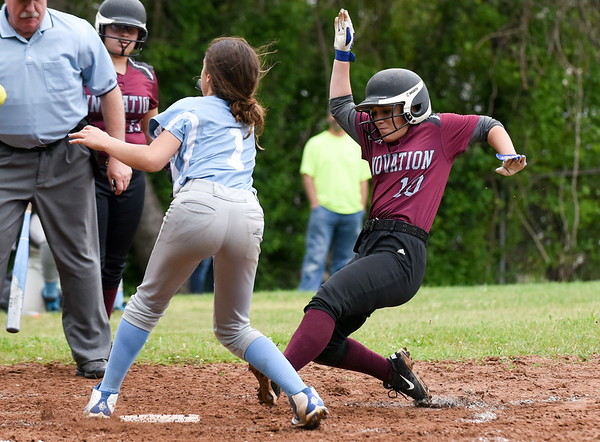 NEW BRITAIN - The Innovation softball team played in its first ever state tournament game on Tuesday afternoon against MLC and took full advantage of the opportunity.

The 11th-seeded Ravens jumped out to an early lead and were able to hold on late to advance to the second round with an 11-6 victory.

“I’m ecstatic,” Innovation head coach Michael Jessie said. “Going from a JV program only four years ago that won just two games, to winning just three games a couple of years ago and now picking up our 15th win of the year and winning a state tournament game is indescribable.

“This has been such an experience,” said senior first basemen Stephanie Rovirosa. “From our first season when we barely won any games to now when we won a state tournament game, I think the team has progressed as a whole and I’m just super proud of the all of the work we have put in to get to this point.”

The Ravens came out on fire offensively early in the game as they batted around in each of the first two innings to take a quick 7-0 lead. In those first two innings, Innovation racked up four of the five hits it would end up with.

The damage could have been even worse in those first two innings as the team left the bases loaded each time, but it didn’t end up costing Innovation and that was the theme of the game. The Ravens made mistakes but in the end, were able to overcome those mistakes to make program history.

“We made a few errors but like we have done all year we just pick our heads right back up and move on to the next plays,” said Rovirosa who finished the game 1-for-2 with three runs and three stolen bases.

Innovation also took advantage of the 13 walks the two MLC pitchers handed out and were active on the base paths. Rovirosa led the way as the Ravens stole six bases in the game and advanced on several wild pitches as well.

The star of the game offensively for Innovation was second baseman Stephanie Ortiz as she was productive in all four of her at-bats. The sophomore walked twice, stole a base, hit a sacrifice fly and had the only extra-base hit of the entire game with a booming triple in the sixth inning to bring home a run.

“It feels really great to have a good game in a game like this,” said Ortiz who finished the game 1-for-1 with a team-high three RBI. “I wasn’t really hitting that well early in the season but I have worked hard to get better and the coaches have really helped me.”

Shortstop Lucy Rodriguez was the only Innovation player with multiple hits. She went 2-for-3 with three runs and also added some highlight-worthy plays in the field.

As the offense provided the runs, Lianna Giles kept the Blue Dragons in check from the pitchers circle. In her seven innings of work, the junior allowed just two hits, while walking six and allowing just three earned runs.

“This is a girl who came in here as a freshman and was our first pitcher and she would average 12-13 walks a game,” Jessie said. “She has cut that down significantly this season even though there were a few today. She has been so good for us.”

Despite their own mistakes, the Ravens won’t have any time to correct them in practice with their second-round game this afternoon against sixth-seeded Norwich Tech, who beat Capital Prep 16-1 in its first-round game.

“I’m going to keep talking to them and keep getting them in the head about it,” Jessie said. “I’m consistent on how I approach it, it’s always the same. I try to keep them up because I don’t want to get on them. They are going to make mistakes but I have to correct them and I thought they did a good job of recovering from those mistakes today and hopefully we can continue [against Norwich Tech.”

“I know that [today] we are going to give it our best and I think we have a chance,” said senior captain Katherine Mason. “I’m just happy that our season didn’t end [against MLC] and we will try to keep it going even longer.”

Michael Woolfson can be reached at 860-801-5203 or mwoolfson@newbritainherald.com