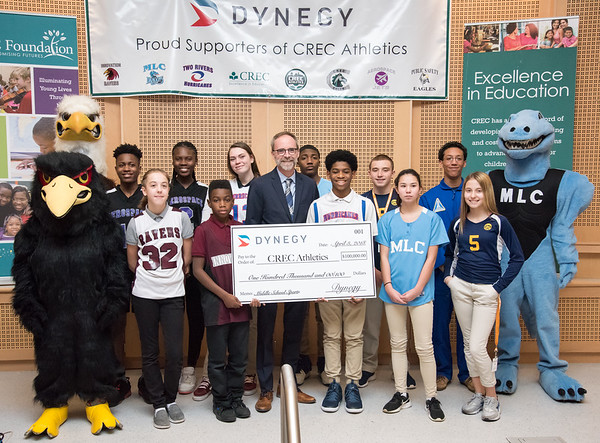 Representatives from Dynegy, a power generating company in the Northeast, MId-Atlantic, Midwest and Texas, presented a $100,000 donation to CREC Athletics. The donation will be used towards the continuation of middle school sports at five participating CREC schools for the upcoming year. Vice President of Dynegy Plant Operations Peter Ziegler, middle, stands with a ceremonial check surrounded by middle school athletes and mascots benefitting from the donation | Wesley Bunnell | Staff Buy this photo
Published on Tuesday, 3 April 2018 21:02
Written by DAN ORENCOLE

NEW BRITAIN - As the end of the school day neared Tuesday afternoon, some of the brilliant minds and future leaders gathered in the large lecture hall at the Academy of Science and Innovation.

There was after all, plenty of celebrate.

For the third consecutive year, Dynegy Inc. - an energy company based in Houston with power generating facilities throughout the U.S.- contributed $100,000 to the Capitol Region Education Council (CREC) in order to save the middle school sports programs from being cut due to budgetary limitations.

While the other four were honored for their individual schools, Mularzuk was the recipient of the first ever Dynegy Citizen-Athlete Scholarship Award. Her dad, Ireneusz, and mother, Boguslawa, were in attendance to see their daughter rewarded for her hard work. The two came over to America from Poland years ago before Natalia was born. She plans to study biomedical engineering and enter the pre-med track. She is still undecided on where she will attend college.

“[My parents] came here in order for me to have a better life and to be able to do more,” Mularzuk said. “This generous scholarship represents not only the work I’ve done but the effort my family has put in and those that have looked up to me.”

There was another first in the building as Chacko will be the first athlete from a CREC school to compete at the Division I collegiate level. Chacko will be attending UConn and running track.

While Mularzuk and Chacko are both representing firsts for CREC schools, the other three student-athletes being recognized also have done great things.

Perryman made sure to take care of her grandmother when she needed her while balancing school and athletics. She described it as “something no kid should have to do.” Her willingness to step up and accept responsibility showed as she delivered a speech with great passion to it.

Godeck helped keep her soccer team focused by helping run practice if their coach was running late. As a freshman, she knew she had great skill on the pitch but made sure not to use it as a reason to boast, yet rather a route to teach and help her teammates grow.

Willis took great pride in being named captain for the Public Safety Academy/Academy of Aerospace football team. He would go out of his way to help teammates academically if needed.

There’s a reason all five student-athletes were nominated to receive awards and Meredith Moore and Peter Ziegler were the two Dynegy representatives in attendance to learn what the donations have meant to the youth. Moore serves as the head of corporate communications and Ziegler is the Vice President of Dynegy Plant Operations.

“I get very emotional when I talk about these things,” Ziegler said. “It really has an impact on me. I played baseball and basketball in high school and my daughters played club sports in college. But I remember in high school, [sports] were huge time management. Academics and athletics teach you nothing but time management. Like I told these young men and women, I really enjoy coming back and seeing this because it invigorates me to go back and lead my teams in our endeavors in business. It’s really important for me to give back to them but they don’t realize they’re giving back to me in the same way. For me, this is a fruitful day and an encouraging day.”

It was a successful day of school Tuesday at the Academy of Science and Innovation and having the ability to retain the CREC middle school sports programs for athletic director Jonathan Winer is a necessary step to ensuring many more students like the five recognized walk through the doors of the schools throughout the future.

“It means everything,” Winer said of the donation. “It means we’re doing our job here. We impress upon our student-athletes and coaches that winning championships is not our objective here. It’s more of a product about doing things the right way, teaching kids about character and building lifelong productive members in society. Our coaches use athletics as an advocate for that.”