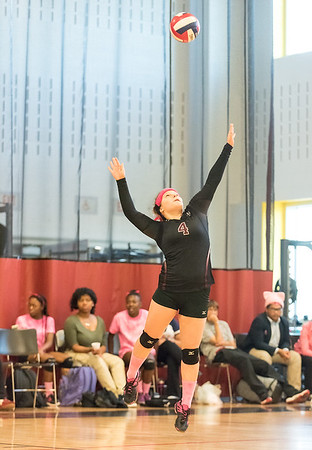 NEW BRITAIN - It was only four years ago when Innovation was trying build a girls volleyball program that could just go out on the court and be competitive. Now, the Ravens are looking to continue their quick rise from a starter program to one they believe is a consistent contender for titles.

So far, Innovation has the results to back up that belief. Under fourth-year head coach Matt Lance the Ravens have made strides each and every year. Innovation finished 9-14 in its first season - its only losing record thus far - before going up to 13 wins in 2014 and 16 in 2016.

Last season, the Ravens went 20-4, won the CRAL regular season and tournament titles, qualified for the Class S state tournament and reached the quarterfinal before falling to Holy Cross.

“Last year it was a culmination [of everything],” Lance said. “A lot of key players were seniors and a lot of those players were playing varsity for the last four years. They were able to jell and fit together very well for that last season. [It was] four years of building and understanding the game. We had several standout pieces last year, seniors who just played really well for the whole season.”

Innovation will not only try to build off that success, it will have to deal with a jump in classification, having been bumped up to Class M. But the Ravens are looking to achieve something that has never been done at Innovation. The Ravens are shooting for their first state championship.

With six seniors returning, they believed they are poised to do it despite losing nine seniors to graduation.

Lance reassured the girls during the first day of practice. He told them it was great they were successful the previous year and no one can ever take that away from them, that it will always be a part of their success. He also informed them that this year is going to be different.

“We’re a different team,” he said. “We still have some of the same players but we’re going to have our own identity. I’m trying to get them to understand that there’s no comparing to last year. We have solid pieces in place that we can build off of. We just have to do what were good at and if we work hard the rest will take care of itself.”

Innovation also has two-sport athlete Aaliyah Walker. She saw more time on the court as the season progressed, but Lance believes she will be a leading threat this year.

Getting through the Class M tournament isn’t going to be an easy feat. But Lance has already made some changes to ensure his team’s success.

“We did schedule a little bit more of a tough schedule in the beginning [of the season],” Lance said. “I told the girls that it’s going to help when the end of the season comes. You have to face those strong teams if we’re going to play in the playoffs.

Innovation has added six difference schools to this season’s schedule, although two are scrimmages - Bunnell and Maloney, two Class L teams - the rest of the season will include Bolton, St. Paul, HMTCA and Wheeler.

“Were looking forward to the challenge this year,” Lance said. “We talked about how this is going to be a new season and we’re going to forge our own identity. I think the girls are ready. They’re ready for the challenge and ready to build their own success story this year.”