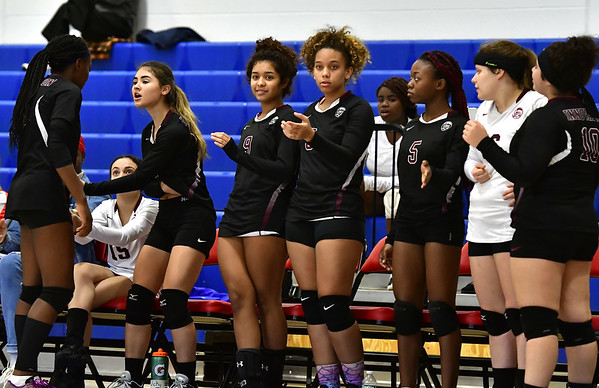 NEW BRITAIN - The Innovation girls volleyball team is heading into the Class M state tournament with some hardware.

In a match the Ravens seemed poised to win since the beginning of the season, Innovation swept Aerospace 3-0 Thursday evening for its second straight CRAL Tournament title. The Ravens (19-3) won by set scores of 25-19, 25-14 and 25-20 on their home floor.

“I told the girls after [the win] I was really proud of them,” said Innovation head coach Matt Lance, whose program is in just its fifth season as a varsity program. “I told them that it was tough after winning every conference match this season to come into the tournament and not put that extra pressure on themselves. It’s great to see.”

All there is for Innovation to do now is to wait for its state tournament draw after securing the No. 4 seed.

And Lance believes his players are more than ready for the teams that lie ahead.

“What I like is we have 8, 9 or 10 girls who can step up at any point in a match,” Lance said. “Our middle hitter Tamia Walker was great all night. We had Ashanti Binns, who hasn’t gotten a lot of varsity time late in the season and came in the third set and came up with two big blocks and a kill. We know that if we don’t have some of our big hitters playing well, we have other girls who can step in and step up.”