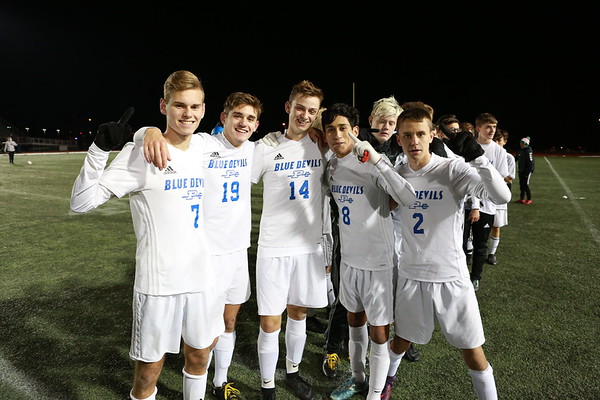 NEW BRITAIN - The Plainville boys soccer team has made history. For the first time ever, the Blue Devils are taking home the Class M state championship, defeating Ellington 1-0 Sunday evening at Veterans Stadium.

After winning the most important game of the year, the Blue Devils were not seen celebrating on the field, but on the fence, surrounding themselves with the people who have been supporting them from day one.

“Everyone from when the program began, came out to support us,” Plainville forward Michael Torres said. “Since the beginning this was our goal, to come to the state final and win it. With the support of all of our fans, the Blue and White Army, it was amazing. The other team played wonderful, but I wouldn’t want to be anyone else right now. ”

Before beating the No. 1 seed in the final, Plainville had to beat the No. 2 and 3 seeds previously.

“It wasn’t a fluky win. I think we dominated every aspect of it and I’d like to think so against the two and three seed as well. So again, I don’t think there’s any argument about who’s the number one team in the state.”

Plainville controlled a majority of the possession in the first half. The Blue Devils were eager to score the first goal of the game, taking a total of 12 shots on goal, but were unsuccessful.

The Knights were able to get a couple shots on goal, but could not make it past Blue Devils keeper Sergio Zaldivar.

He made a number of crucial saves throughout the night and if it weren’t for him, Plainville may have had a different outcome.

“It was very exciting,” Zaldivar said. “Some of us were nervous, but that’s what helped us stay ready for anything that came at us. It feels great to finally win, it took us four years. Us seniors had it in our minds for the entire four years, so it’s a great achievement.”

The Blue Devils knew they only needed one to win the game and with 11:50 left to go in the second half, on a pass from senior forward Dane Stephens, the game MVP, James Raucci found the back of the net for the Blue Devils.

“[At the half] I told my boys we were knocking on the door and we had our chances,” Brown said. “If we keep doing it, we will put one in [the net]. We just need to keep trying, keep doing the right thing and we will get our chance, someone will finish it and we will march off this field as a winner.”

And Plainville did just that.

The Blue Devils finish their Cinderella season 13-7-1, knocking off the top three seeds in the bracket in back-to-back-to-back matches; No. 2 Granby, No. 3 Stonington and now No. 1 Ellington.

The team ended the year winning its last seven matches, going back to the end of the regular season, and seven of its last eight.