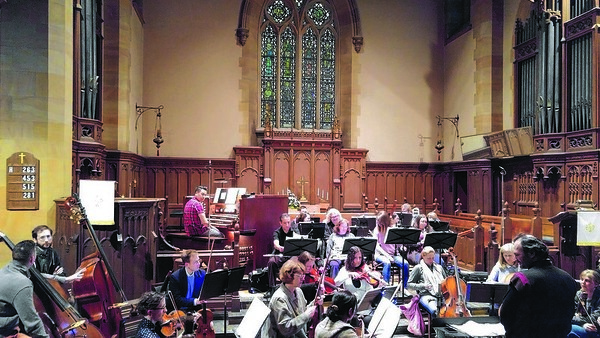 NEW BRITAIN - The Connecticut Virtuosi Chamber Orchestra has a couple of notable performances coming up.

The orchestra will work with singer and songwriter Emma Rae in what is described as a jazz crossover concert.

“We will do jazz songs like Frank Sinatra and such,” said Adrian Sylveen, conductor of the orchestra. “We will also do movie music, like James Bond.”

“We’re going to sit down and perform music that everyone loves.”

Having an orchestra work with a singer in this fashion, Sylveen said, is called a crossover. Rae, he continued, is a “young, up-and-coming, talented person.”

The professional orchestra performers will also be joined by Connecticut Virtuosi students, expanding the orchestra.

The first performance will take place on March 22, at 8 p.m. in the First Church Of Christ Congregational in New Britain, at 830 Corbin Ave. The second performance with Rae is scheduled for March 24, at 4 p.m. in SS. Cyril and Methodius Church, at 55 Charter Oak Ave. in Hartford.

“It’s going to be a community event,” Sylveen said.

The Connecticut Virtuosi Orchestra and Connecticut Lyric Opera will perform the opera “Der Kaiser von Atlantis” (The Emperor of Atlantis) by Viktor Ullmann.

“Der Kaiser von Atlantis” was created in 1943 at the Theresienstadt concentration camp in Czechoslovakia, the “Artists Camp” that was used to deceive the Red Cross and the world into believing that the Jews of Germany and the countries the Nazis occupied were living well under the “benevolent” protection of the Third Reich, according to the Connecticut Virtuosi website.

“They allowed some activities that they would not normally allow in a concentration camp,” Sylveen said.

The first performance has been scheduled for March 28, at 7:30 p.m., at the Trinity-On-Main Arts Center, at 69 Main St. in New Britain. The second will happen at the Wadsworth Atheneum Museum of Art, at 600 Main St., in Hartford, on March 31 at 2 p.m.

Tickets for all Connecticut Virtuosi performances can be found at thevirtuosi.org.