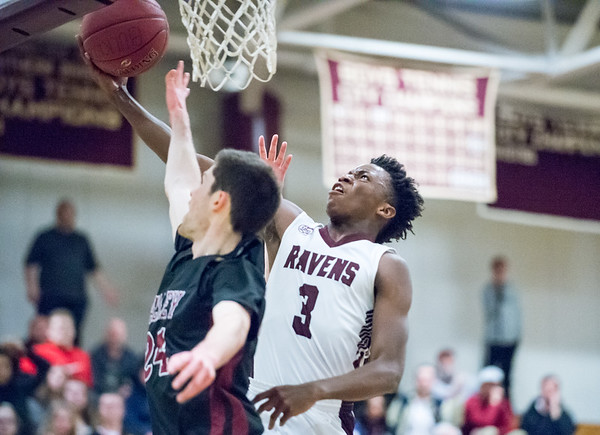 HARTFORD - Seconds before his team took the court for the biggest game of the season, Innovation boys basketball coach Matt Lance told his players, “This is different. Own this moment.”

It took them a while to get going, but in the end the Ravens owned the night with a 42-38 victory over Valley Regional in a Division V semifinal victory Wednesday night that - for the first time in the six-year program’s history - sends it to the state championship game, 10:30 a.m. Sunday at Mohegan Sun Arena.

“It feels unreal,” Emanuel said of going to the state championship game. “I’ve been talking to Carlos about this since freshman year, and we finally did it. It feels so different.”

Holding a seven-point lead heading into the fourth quarter, Innovation had to survive a late charge from the Warriors, but the Ravens never trailed throughout the contest.

Three-pointers from Jake Grow and Gavin Grabowski trimmed Valley Regional’s deficit to 35-33 with 3:40 remaining in the game, and the Warriors had a chance to tie or take the lead moments later.

But Innovation senior Lenny Okonya poked away a pass sent into the low post, leading to a fast-break layup off the glass by L.J. Hazelwood for a four-point lead with 2:15 left.

After Chris Sparaco’s banked-in shot in the post cut the lead to 37-35 with 1:20 left, Lance called a timeout. Out of the break, Lester Emanuel set up a cutting Okonya with a terrific pass, leading to a layup for a four-point advantage.

The Ravens came up with consecutive defensive stops on the other end and took a six-point lead behind one free throw apiece from Ramiesh Bogle and Okonya.

Cade Ensinger buried a 3-pointer with 1.9 seconds left, but Bogle sealed the game at the line by hitting his second free throw for the four-point victory.

The game got off to a rough start both ways, as Okonya buried a 3-pointer on the game’s opening possession, but there was a lid on the basket the rest of the period for the No. 1-seeded Ravens (23-2), who limped to a 2-for-12 shooting performance in the first quarter.

But No. 5 Valley Regional (17-6) wasn’t putting a clinic together on the other side, shooting 2-for-10 in the period, having trouble penetrating a Ravens defense that forced seven turnovers in the first eight minutes.

Poor shooting on both sides led to a grind-it-out 6-5 first-quarter lead for Innovation, which took a 10-5 lead early in the second on the back of a floater from Ramiesh Bogle and a sweeping layup by Lester Emanuel.

Even more scarce offense followed, as the Warriors finally ended the two squads’ three-minute scoring drought with a Kevin Fasulo jumper from the elbow at the 3:25 mark.

“The thing not everybody might understand about us is we’re all about defense,” Hazelwood said. “When offense isn’t working for us, we’re gonna bust our behinds down here.”

The Ravens ended the half with three straight buckets, two on drives from Emanuel and another by Hazwelwood in transition for an 18-10 halftime cushion. In the first two quarters, Valley Regional shot 4-for-23, including 1-for-10 on 3-pointers.

To open the third quarter, Hazelwood and Okonya each earned trips to the line on “and-one” plays, and Hazelwood converted his free throw.

Hazelwood then worked inside on a baseline-out-of-bounds play, muscling up a shot in the post for an eight-point lead, then the junior forward grabbed an offensive rebound off his own miss, somehow maintained his balance, and kicked out to Carlos Gonzalez on the perimeter, who knocked down a trey.

Okonya then buried a 3-pointer at the buzzer for a 32-25 lead to close the third quarter.

The Ravens survived 18 turnovers and forced 15 on the night.