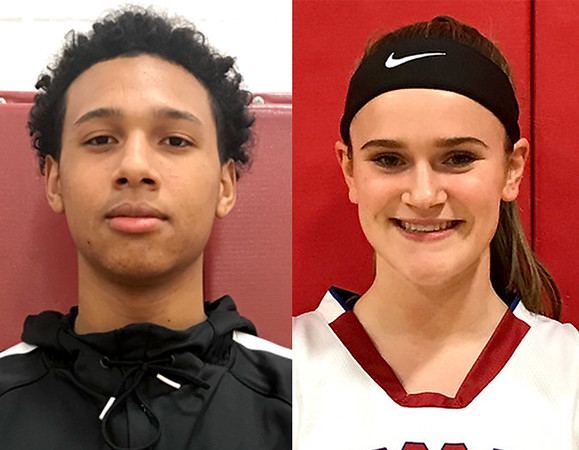 State tournaments have come to a close, with one local team returning from Mohegan Sun Arena with hardware thanks to big individual performances to capture a state title. Others fell just short, but not because of a lack of production from star players who shined in their team’s biggest moments of the season.

Innovation’s LJ Hazelwood and Berlin’s Angela Perrelli are this week’s Athletes of the Week for their phenomenal postseason performances.

The Innovation boys basketball team needed a big performance to secure its first-ever state tournament championship, and they got one in junior LJ Hazelwood, who scored 10 of his 14 points in a decisive third quarter that put the game out of reach for No. 3 Old Lyme.

“He seemed very relaxed,” Innovation head coach Matt Lance said. “He didn’t seem like the moment was getting to him. That second- and third-quarter performance, that was just another game for him. I don’t know of many people who can do so many things well like he does every night.”

Lance watched Hazelwood average a double-double for the season and carry that production into the state tournament, particularly on Sunday, as Hazelwood helped the Ravens pull themselves out of an early 10-2 hole and go on to rout the Wildcats by 21 points. Hazelwood knocked down five field goals in the third quarter, which ended with Innovation ahead by 12, its largest lead of the game to that point.

“He’s our one player who we know what we’re going to get from him every night,” Lance said. “He’s a walking double-double. He’s so assertive on the glass. He really came alive in the second half [on Sunday].”

Hazelwood’s performance was especially satisfying considering the obstacles he had to overcome heading into this season. After breaking his ankle in practice as a freshman, Hazelwood suffered a torn meniscus last year, forcing him to miss the second half of the season, including the Ravens’ heartbreaking loss to Cromwell in the Division V quarterfinals. With a healthy Hazelwood back on the floor for Innovation, the Ravens cruised to a state title in just their sixth year of existence.

“When we went on that run last year, we had to do it without him,” Lance said. “I’m so happy for him that he was able to stay healthy and play in those big games that he wasn’t able to play in last year.”

Hazelwood didn’t just play, he thrived, while helping Innovation achieved what he considered to be the most important objective of the season.

“All LJ cares about is the team winning…and how many rebounds he gets,” Lance said. “I’m just happy he got to compete in those big moments.”

The Berlin girls basketball team fell short in its own quest for a state title, but Perrelli turned in one of her best performances of the season in what would be her last game in Berlin red.

As the Redcoats continued to struggle to solve Sheehan’s Liv Robles in last Monday’s Class M state semifinals contest, Perrelli kept Berlin alive until the final seconds of the fourth quarter thanks to a red-hot start that featured three 3-pointers in the first quarter, helping Berlin build an 11-point lead in the first half.

As the lone senior starter on the team, Perrelli helped pace the Redcoats’ offense with 15 points on the team’s biggest night of the season, showing what Berlin will have to make up for next season as Perrelli graduates this spring.

“Angela is a big loss,” Berlin head coach Sheila King said. “[The underclassmen] were able to [succeed] through exceptional leadership from people like Angela.”

Perrelli’s senior guidance was critical for a young Berlin team with a world of talent, but minimal experience. Perrelli’s wisdom helped the Redcoats record one of their deepest tournament runs in recent memory, after suffering through a pair of losing seasons in her first two years on the team.

“What she’s had to endure the last four years, to be at a state semifinal is outstanding.” King said.”

Perrelli didn’t get a trip to Mohegan Sun Arena like she wanted, but as King said of her lone graduating starter, Perrelli leave the program in a much better state than she found it four years ago. Her teammates that will look to replace her consistent scoring would say the same.

“Angela is obviously a huge part of who we are,” sophomore Lyzi Litwinko said. “She’s a big part of our family.”