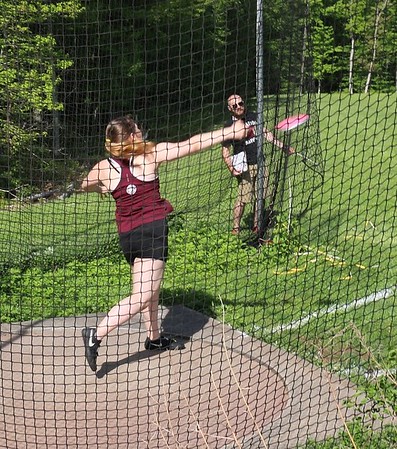 Morgan Sartor of Innovation girls track competes in the discus event earlier this season. Buy this photo
Published on Monday, 20 May 2019 20:42
Written by RYAN CHICHESTER

NEW BRITAIN - The Innovation boys and girls outdoor track teams may start hearing the word ‚Äúdynasty‚Äù whispered through the school‚Äôs hallways after Sunday‚Äôs performance at the CRAL Championships.

Both teams won their conference championships on Sunday, marking the second straight conference title in outdoor competition for the boys squad, while the girls squad has now claimed seven in a row, when combining indoor and outdoor seasons.

For the Ravens, the crowded trophy case speaks for itself. Mounting wins doesn‚Äôt diminish the accomplishment at all, instead solidifying their standing among the best teams in the area.

‚ÄúI think it was definitely a goal,‚Äù coach Matt Lance said of the conference titles. ‚ÄúOur girls have done it a bunch of years in a row, and now the boys have for a couple years. Their sustained excellence is something that we're very proud of as a program, to be able to compete year in and year out for conference championships.‚Äù

The girls team was led by senior Aaliyah Walker, who claimed three events and set a school record in the triple jump with 36 feet, 2.5 inches. Morgan Sartor claimed two events of her own, winning both the discus and the shot put, while setting the school record in discus with a throw of 111 feet, 11 inches, which was also the third-farthest throw in Class M this season.

‚ÄúShe's just been putting in non-stop work,‚Äù Lance said of Sartor. ‚ÄúIt's nice when the athletes put in extra time on Saturdays and early mornings, and start to see results. As a coaching staff, we're happy for her because she's been putting in so much work.‚Äù

Freshman Mya Saylor recorded a win in the 100-meter hurdles, while juniors Victoria Merced and Breanna Santana also qualified for states with in the long jump and triple jump, respectively.

‚ÄúIt's crazy to look and say you expect a student athlete to win three conference championships, but he's just that good,‚Äù Lance said of Corso. ‚ÄúHe's mixed it up a bit this year. He's part of our 4x400 meter relay team and we're hoping for that group to do really well at states this year. Naturally, he did really well in the 3200 because he runs cross country. [Sunday] wasn't a surprise at all but it shouldn't diminish the fact that what he did was really excellent.‚Äù

Quentin Askew finished just behind his teammate Corso in the 800, but won his own event in the 400-meter. Jonathan Rodriguez (110-meter hurdles), Lenny Okonya (high jump) and Colby Gray (triple jump) all walked away as conference champs as well, and Gramoz Ajeti qualified for states in the shot put event to continue the Innovation‚Äôs overall dominant performance.

As the focus now shifts to states, the Ravens hope to carry their overwhelming conference success against even stronger competition, and hopefully secure trips to the State Open in the process.

‚ÄúI know individually, a lot of kids we have left are super competitive, and not only have their eyes on doing well, they want [personal records],‚Äù Lance said. ‚ÄúAnd they have their sights set on doing great at class events (Class M for girls, Class S for boys) to be able to go on to the State Open. We had a few go last year and the goal is to get back again this year.‚Äù