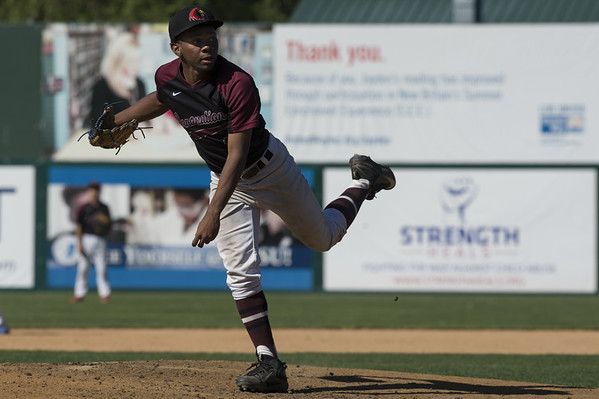 NEW BRITAIN - The Innovation baseball team would have likely preferred its regular season finale to be less climactic.

Even with the surrounding aesthetics of New Britain Stadium, the Ravens were hoping for an eventless finish on Tuesday afternoon against MLC, but a pair of errors led to a three-run seventh inning for the Dragons, putting Innovation on the cusp of a major collapse before holding on for a 6-5 win and a spot in the Class S state tournament.

“I think the enormity of playing in a professional stadium got to some of the guys,” head coach Ryan Anderson said. “Our second baseman is just a freshman and made a couple mistakes, but the kids stuck with it. They battled through the mistakes.”

Leading 6-2 heading into the seventh, second baseman Yonathan Ramos threw away a potential game-ending double play, the Ravens’ second error of the inning. A two-run single followed and cut the lead to one before reliever Steven Hicks forced a groundout to end the game and strand the winning run on first.

Hicks pitched three innings of relief and allowed just one earned run on one hit, while smacking three hits at the plate in an overall productive day.

“I just saw the ball well,” Hicks said. “I was locked in. Pitching-wise I was a little shaky at first, but once I got into a groove I started cruising.”

The Ravens (7-9) wasted no time getting into a groove at the plate, using a leadoff single by Melvin Saylor to push across the first run of the game in the top of the first. With Saylor on third after a steal and a wild pitch, Jeremiah Ramos struck out on a pitch in the dirt but alertly took off for first to draw a throw from MLC catcher Markel Gooden, who couldn’t field the third strike cleanly. The throw went to first for the out, but Gooden darted for home and scored without a challenge.

Innovation continued its early pressure in the second, loading the bases with one out for Saylor, who lifted a towering popup to shallow left that popped out of the glove of shortstop Anthony Noke, allowing Jorge Posadas to score and give the Ravens a 2-0 lead. Jeremiah Ramos followed with a hard single past Noke to plate Julian Figueroa, giving Saylor plenty of immediate run support on the mound.

Working with an early lead, Saylor breezed through the Dragons’ lineup, retiring the first nine hitters he faced, including five by strikeout. The lefty didn’t allow a baserunner until the bottom of the fourth, when Dominick Whalen led off with a hard comebacker that glanced off Saylor’s glove. Saylor ran the rolling ball down and hurried a throw to first, but it sailed wide and allowed Whalen to advance to second. After a strikeout and a stolen base, Whalen was brought home on an infield single up the middle off the bat of Ben Mansur, giving MLC (6-9) its first run of the day and the first crack in the armor of Saylor.

The Dragons had a chance for more after loading the bases, but Saylor escaped on a high pop to second, that was bobbled by Ramos before he regained control to secure the catch and end the threat of further damage.

“It felt great to have my team behind me and the fans in the stands,” Saylor said. “They helped me do the things I was able to do on the mound.”

The Ravens took the run right back in the fifth, and then some. Hicks started the rally with a towering triple over the center fielder’s head and advanced home after an errant throw from Noke on a relay to third went out of play. After two walks put a runner in scoring position, Devante Gohagen bounced a slow roller to third and beat the throw for an infield single. Ramos took off for third on the play and continued toward home when the throw went across the diamond, but got caught in a rundown that threatened to end the inning. Ramos hustled back to third and Gooden airmailed the throw, but left fielder Thomas Braun in position to back up the throw from the outfield to hold Ramos at third. However, the ball scooted right under Braun’s glove, allowing Ramos to score and increasing Innovation’s lead to 5-1.

Much like the Dragons in the top half of the inning, the Ravens were burned by a defensive miscue in the bottom of the fifth. With one on and one out, Ramos fielded a grounder to the right side that appeared to be a patented double play ball. But Ramos threw wide to second, putting runners at the corners. Hicks responded with a big strikeout, but walked the next two batters, including Colon on a 3-2 pitch, to force in a run and cut the lead back down to three.

Once again, Innovation took the run right back in the sixth, and it turned out to be a crucial one given how the seventh inning unfolded. Still, despite a total of four errors, all in the final three innings, the Ravens held on and avoided disaster.

“The message was to leave it on the field and give everything you’ve got,” Anderson said. “I’m proud that they stuck with it and got the win.”