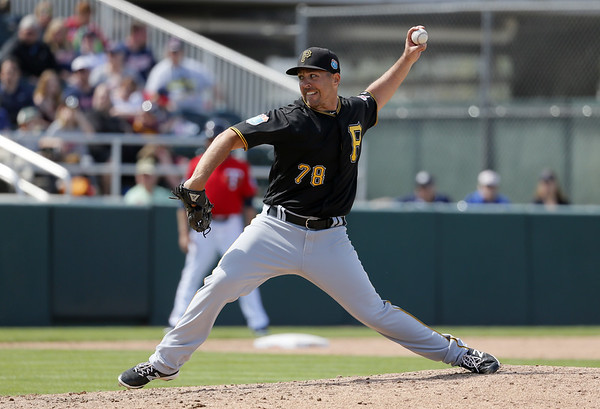 AP Now with the New Britain Bees, Jim Fuller works for the Pittsburgh Pirates against the Minnesota Twins during a 2016 spring training game. Buy this photo
Published on Wednesday, 22 May 2019 21:29
Written by RYAN CHICHESTER

NEW BRITAIN - Had last weekâ€™s series finale against the Lancaster Barnstormers not gotten away from the New Britain Bees, manager Mauro Gozzo would have been ready to give the ball to reliever Jim Fuller in a high-leverage situation.

Fuller, who has emerged as one of the teamâ€™s top relievers so far this season, waited for Gozzoâ€™s call while the Bees were clinging to a 3-2 lead, but a five-run seventh inning from the Barnstormers turned a tight contest into a deflating blowout. Fuller may not have taken the mound, but Gozzoâ€™s plans for his surging lefty were telling.

â€śOne hundred percent,â€ť Gozzo said when asked if Fuller has earned late inning work after his solid start to the season. â€śAbsolutely. Heâ€™s a seventh- to ninth-inning guy right now. I like what Iâ€™m seeing right now.â€ť

Looking at Fullerâ€™s numbers so far, itâ€™s not hard to tell why Gozzo is so adamant about a promotion for Fuller. Through nine innings of relief work, Fuller boasts a 0.96 ERA with 11 strikeouts.

Opposing batters are hitting just .130 against the southpaw this season, as the 31-year-old continues to prove his worth, most recently a scoreless seventh against the Long Island Ducks, in which he struck out two batters to maintain a lead, and a scoreless frame against Lancaster on Tuesday night to protect a one-run lead in the eighth.

Fullerâ€™s hot streak has moved him into the conversation of pitching in the eighth and ninth innings more often, according to Gozzo.

Of course, this isnâ€™t anything new, as Fuller pitched to a 2.09 ERA and struck out 52 batters in 43 innings with the Bees last year.

While some pitchers have taken time to settle into the new season, Fuller has needed no such adjustment, storming out of the gate in a familiar area. A graduate of SCSU, Fuller is thriving in his second season with the Bees after spending time with the New Britain Rock Cats back in 2014.

â€śIt all depends,â€ť Fuller said. â€śWe didnâ€™t have much of a spring training this year, so it might take a little longer for some guys, but Iâ€™ve been feeling good.â€ť

Fuller currently leads the Bees with four holds on the year, including a scoreless frame in the seventh inning of a one-run game against the Barnstormers last week.

Whether he enters the game in a crucial spot like the one against Lancaster or a blowout scenario that he watched from the bullpen on Thursday, Fuller feels ready to compete regardless of the situation, even if other relievers have trouble adjusting to different scenarios.

â€śI think some guys have that mentality and are in close games all the time,â€ť Fuller said. â€śPitching is not easy.â€ť

The art of pitching is certainly not easy, but over the past three weeks, and even the season prior, Fuller has made it look that way.