Innovation celebrates seven athletes who have committed to college teams 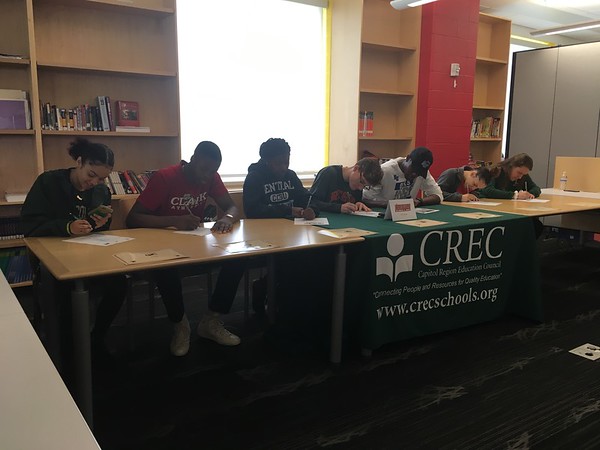 NEW BRITAIN - The signing table at the Academy of Science and Innovation was awfully crowded on Wednesday morning, as the school celebrated seven athletes who have made their commitment to play competitive sports at the collegiate level, ranging from Division I to Division III schools, and representing five different sports.

Lance, along with other Ravens coaches, acknowledged the athletes who have combined to win championships at the conference and state level during their tenure at Innovation.

The first to be acknowledged was Quentin Askew, who committed to compete in track and field at SCSU after setting school records in seven events during his time with the Ravens. Askew decided to compete in track over basketball at Innovation, and chose SCSU for the academic opportunities as much as the athletic benefits.

A.J. Corso was next to be honored, a cross country standout at Innovation who will be taking his talents to Regis College in the fall. Corso, a conference champ for the past two years and a fifth-place finisher at the state championships with a 4:43 mile, chose Regis over a number of other opportunities because of its welcoming atmosphere.

“I wanted a college that felt like a home,” Corso explained. “I was looking at a lot of others ones, but I felt really comfortable at Regis.”

Aaliyah Walker enjoyed a number of conference championships herself over the years, including wins in the high jump, long jump, triple jump and 300 meter hurdles, while qualifying for states in the latter event. Walker will begin her collegiate journey at nearby CCSU next season.

“I chose Central because it was close to home, but far enough away,” Walker said. “I’ve seen some of the runners on the team and I wanted to have the same goals as them. It was the best decision for me.”

Morgan Sartor will be competing at LeMoyne College after a decorated career at Innovation that is not over yet, as she qualified for the New Balance National Championships in the hammer throw event, which will take place in early June. Sartor holds the CRAL records in shot put and discus before taking off in the hammer throw this season.

The final three athletes to be honored represented three different sports, the first being Gabby DeJesus-Brown, who committed to play soccer at Elms College after winning three regular season conference championships with the Ravens, and earning an All-CRAL nod as a senior.

“I don’t really have words to explain it,” Brown said. “I’ve always put my hardest into everything I do. That’s what I plan to do when I go to Elms. I know it will be a challenge, but I know I can do it as long as I go into it with the same energy I did this season.”

Lenny Okonya also helped win conference championships during his time with the basketball team, and helped clinch a state championship in March. Okonya also competed in track and qualified for states with a high jump of six feet, but he shined the brightest on the hardwood, where he was one of the first two Innovation players to earn All-State honors in team history, earning the award alongside teammate L.J. Hazelwood.

“This moment is unreal,” Okonya said. “I’m the first in my family to play a sport competitively in college at the next level. It’s really a good feeling. I’m glad to say I was able to achieve what I’ve achieved, and to have the ability to play at the next level. I’m truly blessed and appreciative of this opportunity.”

Danelys Baez-Arroyo won a pair of conference championships with the Innovation girls volleyball team, and saved her best performance for last, when the team captain earned all-conference honors as a senior, helping her secure her next step at Mitchell College.

“I always dreamed of playing in college and making my mom proud,” Arroyo said. “It’s great to see that I’m capable of doing things I strive for. I’m very excited.”

Ryan Chichester can be reached at rchichester@newbritainherald.com