Saylor, Hicks have been key to Innovation baseball's run to state tournament 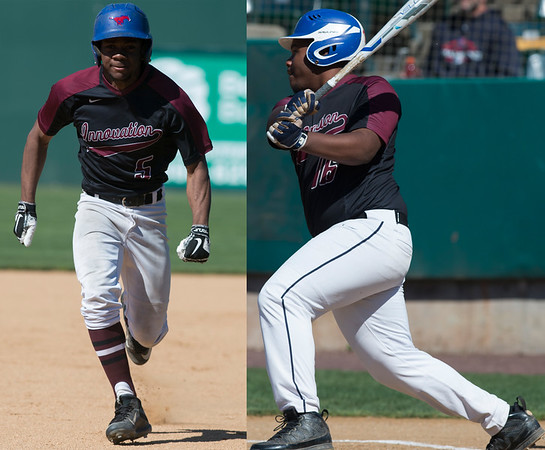 NEW BRITAIN - When Innovation baseball head coach Ryan Anderson looked at the box score of his team’s 6-5 win over MLC on Tuesday, he saw a pleasantly familiar sight.

Next to the names of his top upperclassmen in Melvin Saylor and Steven Hicks was a whole lot of production. The two combined for four hits and three runs scored, while also pitching all seven innings on the mound where they allowed just two earned runs and 12 strikeouts.

For Anderson, the clear value from his junior (Hicks) and senior (Saylor) is nothing new, but that doesn’t make it any less appreciated.

“We have 13 guys and they’ve carried them all season,” Anderson said. “They’re two great kids and they always step up in big moments.”

If you ask Hicks and Saylor, they may be two kids, but they’re more like one unit. Inseparable since their time at Two Rivers High School, the duo have come to Innovation and made a mark on a program still in its infancy.

The connection began as a rivalry, with the two facing each other in AAU games before teaming up at Two Rivers, and eventually Innovation. Saylor, a sophomore at Two Rivers when Hicks arrived, saw a freshman sitting alone on bus rides to games before raking on the field, and the rivalry turned into a close friendship that has strengthened with each passing game together, even if there are still times when they occupy opposing dugouts.

“He’s such a good player,” Saylor said of Hicks. “It’s fun playing against him. If he’s pitching I want to get a hit off of him, and if I’m pitching he wants to get a hit off of me. When we play each other in the fall, guys will ask if I know Steve and I say ‘yeah, that’s my kid.’”

When the two share uniforms with the Ravens, it’s Anderson who boasts the two friends are his ‘kids,’ at least for another week or so before the season ends and Saylor makes his way to graduation and eventually Eastern Connecticut State, where he plans to walk on to the baseball team.

“Melvin’s been great for four years,” Anderson said. “He’s carried the load as a freshman all the way through his senior year. And Steven is just the best in the league, quite honestly. He’s one of the best kids in Connecticut I think.”

Opponents will finally be free of Saylor’s electric arm and terrorizing speed at the end of the season, but they’re stuck with Hicks’ explosive bat for another year, as the senior will undoubtedly continue to get looks from interested colleges next year, while opposing managers check their calendars to see when he will stop decimating their pitching staffs for good.

“Steven coming back is a great thing,” Anderson said. “Everyone we face always asks how old he is and when we’re losing him, so he’s a valuable player to the program. We’re really excited to have him back for his senior year.”

Hicks will still remain at Innovation in 2020, but there will be a notable absence in Saylor, who was been one of the faces of the program since its inception. Still, Saylor knows the Ravens are in good hands with Hicks. After all, he knows what it’s like playing against his good friend, and he prefers the alternative.

“It was my team through four years, but this is his team now,” Saylor said, giving Hicks a friendly slap on the arm.

Hicks feels ready to take on that responsibility, largely due to the guidance of his close friend that consistently offers him RBI opportunities, or hands him the ball with a lead when coming off the mound.

“He’s a great player,” Hicks said of Saylor. “I have some shoes to fill, but I think I can do it.”