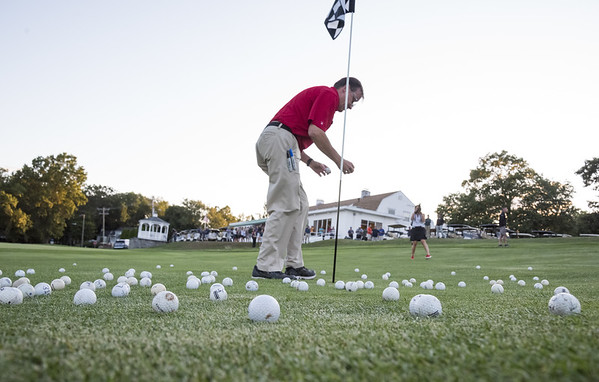 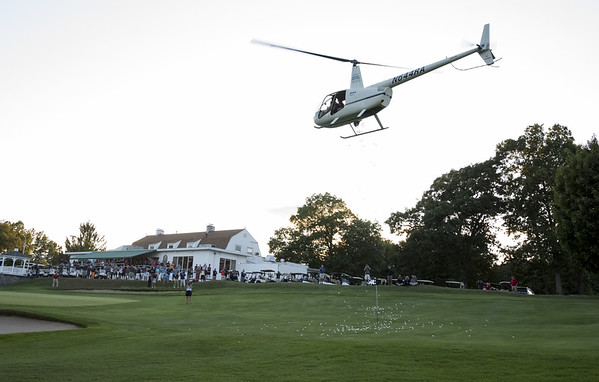 09/17/19 Wesley Bunnell | Staff Kelser Corp. held its annual Kelser Charity Challenge Golf Tournament which benefits the Hospital for Special Care Center for Cognitive Health on Tuesday, Sept 17 at Indian Hill Country Club. A helicopter piloted by Jonathon Stone, the CTO of Kelser Corporation, drops hundreds of numbered golf balls towards a pin which were sold at raffle for the tournament. Buy this photo

NEW BRITAIN - A good cause and a beautiful Tuesday brought out nearly 150 golfers to participate in the 23rd annual Kelser Charity Challenge Golf Tournament at the Indian Hill Country Club in Newington.

In support of the Hospital for Special Care Center for Cognitive Health, golfers, spectators, sponsors and community members were all eager to do what they could to help create awareness for memory disorders such as Alzheimer’s and dementia. Kelser Corp., an IT consulting firm, was owned by Bruce W. Kelly. He founded the firm in 1981 and ran the company until he was diagnosed with Alzheimer’s. He then sold the company to his brother, Barry, who has been Kelser CEO since 2010.

For Jim Parise, president of Kelser Corp. and longtime participant, the sold-out event reflected the importance of the cause for many people, including himself.

“I had to contend with the difficulties of taking care of both my parents who suffered from memory loss. There were no resources available then, so to have a center like this where people can go for help is incredibly important,” said Parise. “It means a lot to know that it’s there for not only patients, but for their families as well.”

The Center for Cognitive Health opened in November 2018. Since its unveiling, the center has cared for roughly 150 patients and the numbers continue to grow.

With the support from Kelser and numerous local organizations, the center has the ability to allocate resources from neuropsychologists, occupational therapists and speech language therapists to go through evaluation, intervention and treatment with the patients, said Wendy DeAngelo, vice president of development and communications for the Hospital for Special Care.

“As we age, it’s critical to be able to know when you’re going through everyday forgetfulness compared to being diagnosed with a memory disorder,” she said. “With the center, we have the tools to help people with that.” As part of the center’s programs and through the community’s generous support, there are ongoing outreach plans to have medical professionals help raise awareness through speaker events and informational sessions.

“This is to help people understand the disorders more and to let them know that there are resources available,” said DeAngelo.

Moments before preparations to tee off, Boyd Eastman, childhood friend of Barry Kelly, said it was his honor and privilege to help support his friend’s charity event.

“We’ve played golf together for many years. Barry always has a good charity to support and I like to support my friend,” said Eastman. “It makes me happy to help him give back to the community and it’s always a good reason to get together.”

Catherine Shen can be reached at 860-801-5093 or cshen@centralctcommunications.com