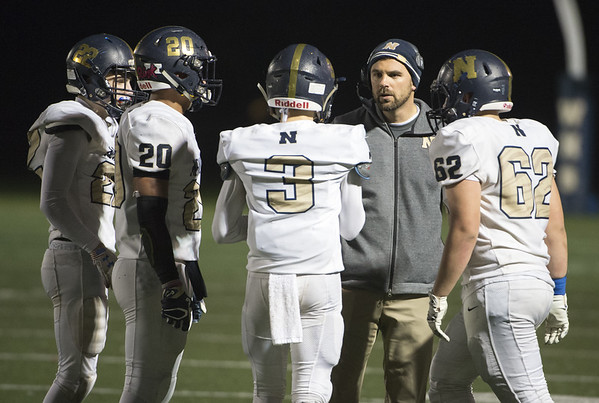 NEWINGTON - The Newington football team was already facing a steep uphill climb in Wednesday night‚Äôs Class L quarterfinal matchup with second-seeded Daniel Hand, but its path to upset the top-ranked team in the state just got even rockier.

The Indians (7-3), who will travel to Hand (10-0) to try and knock out the two-time defending state champs, will be without their starting quarterback in junior Nick Pestrichello, who suffered an injury in his non-throwing shoulder during last week‚Äôs loss to Wethersfield.

Pestrichello had been one of Newington‚Äôs most dynamic playmakers on the offensive end in the team‚Äôs first winning season since 2012 and first postseason appearance since 2008, posting a QB rating over 111.7 while throwing for more than 1,600 yards on the season. Without Pestrichello, the Indians will turn to sophomore Austyn Howe, one of the team‚Äôs leading receivers who will now be under center against a Tigers defense that hasn‚Äôt allowed more than 14 points in a game all season, and has won all 10 games this season by an average margin of 33.6 points per game.

‚ÄúWe had a good practice with Austyn at quarterback,‚Äù head coach Jason Pace said. ‚ÄúWe know he‚Äôs a tough player that‚Äôs going to give it his all out there. The team believes in him.‚Äù

Newington certainly isn‚Äôt feeling bad for itself after the devastating injury news, mainly because it doesn‚Äôt have time to do anything but prepare for Hand. The quick turnaround after Wednesday night‚Äôs disappointing 35-0 loss to their rival Wethersfield has left the Indians with little time to dwell on any past mistakes or current predicaments. The top priority is soaking up every available moment to prepare for the toughest test of the season.

‚ÄúIt‚Äôs been a challenge getting everyone physically and mentally healthy with a quick turnaround,‚Äù Pace said. ‚ÄúThe hardest part is just the schedule. You have to squeeze so much into a small window of time and you can‚Äôt really take any days off. We gave them off Thanksgiving, but the coaches were here for a few hours breaking down film. Friday and Saturday, we had to go. There were really no days off, which is something we haven‚Äôt really done all year. That adjustment, mentally and physically, can be a challenge, especially getting ready for a team like Hand. You look at their entire team and there‚Äôs no weakness. But we have to make sure we‚Äôre ready.‚Äù

Hand is operating on a similar preparation schedule, but has been performing on a different level from almost any other team in the state since the season began.

The Tigers offense is putting up 45.7 points per game and are coming off a 61-point performance against Guilford in their regular season finale, and also has a 56-13 win against Wethersfield, which handled Newington a week ago, on its overwhelming resume. The electric scoring attack is led by quarterback Phoenix Billings, an All-State selection last season who is likely headed for another after throwing for 1,371 yards in the regular season while posting a QB rating of 124.1. Every opponent that has tried to slow down Billings this season has failed, and the Indians, while confident, aren‚Äôt downplaying the challenge that lies before them on Wednesday night.

‚ÄúOur defense is going to have to play a strong game,‚Äù junior AJ Ferreira said. ‚ÄúWe can‚Äôt give up easy routes or passes or anything. [Billings] can run and pass, so we‚Äôre going to have to execute as best we can and limit his yardage as much as possible.‚Äù

The challenges won‚Äôt stop there. On the defensive end, Hand is stacked with premier talent, including All-State defensive lineman Ben Corniello, who presents a prolific defensive front that Newington will have to create openings against for running back John Amaning, who will likely be heavily relied upon with Pestrichello‚Äôs absence potentially shrinking the playbook in terms of passing plays. Amaning and the Indians‚Äô offensive line will have to get push at the line of scrimmage against Corniello, which will be by far its toughest assignment to date, even after taking on No. 10 Maloney earlier in the season.

‚ÄúWe know they‚Äôll be big up front,‚Äù Pace said. ‚ÄúWe have to make sure we do what we‚Äôve done for most of the year and don‚Äôt get down if things don‚Äôt go our way. We have to stay positive. We understand it‚Äôs going to be a great challenge, but with that comes a tremendous opportunity. We can showcase the team we are and the type of people we have in our program. That‚Äôs the opportunity that‚Äôs out there, to show the caliber of team we are, and that we can play football with anybody.‚Äù

Staying positive and keeping focus will be key for Newington on Wednesday, as it was a major factor in its humbling loss to the Eagles last week, where a fumble deep in their own end turned into a touchdown and ignited a rout for Wethersfield. Traveling to Hand will be even more of a hostile environment, where the Tigers haven‚Äôt lost in their last 19 tries.

The odds are stacked against Newington, but they were before the season began as well. The Indians are hoping to prove their doubters wrong just one more time, and pick up what would be one of the biggest upsets in the state this season.

‚ÄúWe‚Äôre going to focus on taking it one play at a time,‚Äù Pace said. ‚ÄúIf one doesn‚Äôt go our way, we shift our focus to the next one. If we carry that focus the entire game and have that mindset, and play with toughness and determination, we can have some success. The mindset is that it‚Äôs a playoff game, and we have a tremendous challenge ahead of us. They‚Äôre the No. 1 team in the state for a reason. They‚Äôre that good. If you‚Äôre a program that has that kind of success, you expect it. We have to figure out what we can do to have our own success in that game.‚Äù