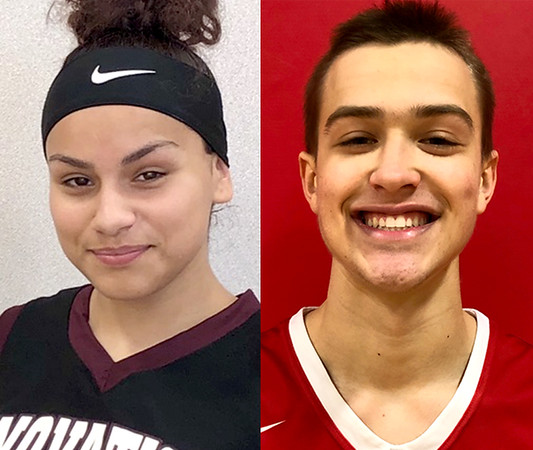 The past week was one to remember for a pair of area athletes on the hardwood.

Whether it was a historic night or a historic week, these two local talents balled out and showed their ability to take over a game when needed.

Innovation’s Ariana Rivas and Berlin’s Jeff Madeia are this week’s Athletes of the Week for filling up the stat sheet in historic fashion.

The Innovation girls basketball team is nearing a state tournament berth, and the Ravens are approaching their goal thanks in large part to Rivas, who is coming off of another dominant week in a stretch where the junior is playing some of the best basketball of her career.

Rivas has posted a double-double in each of her last five games, averaging 14.4 points and 12.8 rebounds per game during that span. Innovation went 3-2 in that stretch, including a three-game winning streak that was capped off by a 63-43 win over MLC on Wednesday night, which marked the highest single game scoring total for the Ravens in program history. Rivas helped Innovation set that record by contributing 11 points and 16 rebounds, just days after leading the team to a win over Terryville with a game-high 19 points and 14 rebounds.

Last Friday, Rivas finished with 12 points and 12 boards in a win over Civic Leadership, and the day prior, Rivas filled the stat sheet with 15 points, 11 rebounds, five assists and four steals, though Innovation came up just short in a four-point loss to Hale Ray.

Rivas had to miss the Ravens’ last game after turning her ankle, but once she returns to the floor, it will be hard not to expect continued production from head coach Michael Jessie’s double-double machine.

“She has been one of our best all-around players,” Jessie said of Rivas. “She plays the game hard and does the little things that help teams become successful. You can see this after most games with the bumps and bruises she gets from diving for loose balls or banging inside against much taller opponents for rebounds.”

The physical play for Rivas pays off with high rebounding numbers and an ever-growing double-double total. Rivas, who was named to the All-Tournament Team at the Bristol Holiday Tournament back in December, has been a key part of Innovation’s state tournament quest since the season began, but has especially picked things up of late, and the team is hoping her ankle injury won’t keep her out of Tuesday night’s game against Achievement First.

Rivas was having a career week before her ankle injury, and on Thursday night, the Berlin boys basketball team got a career night from its senior Madeia. Looking to secure an upset win over Manchester, Madeia led the Redcoats with a career-high 31 points on 14 field goals, and also grabbed a career-high 16 rebounds, though Berlin came up short in an 82-72 defeat.

Despite the outcome, Madeia’s night was one of the most productive individual performances by a Redcoats player this season. Madeia, who is leading the team with 15 points per game and 7.5 rebounds per game, was one of the only returning contributors from last year’s senior-heavy group, and in a year where a load of offensive production was lost to graduation, Madeia has stepped up and taken on a leadership role for Berlin and head coach Mike Veneziano.

“His game continues to evolve daily,” Veneziano said. “In the beginning of the year he was indecisive with the ball at times. Over the last five or six games he has really allowed the game to come to him. He’s scoring at a high rate and at the same time setting others up.”

Madiea is third on the team in assists, showing his willingness to find a higher percentage shot for teammates despite being counted on for a lot of the Redcoats’ scoring. He took over for his team on Thursday night, showing his offensive versatility by shooting 14-for-18 from the floor in an ever-changing role that the senior seems to handle effortlessly.

“During any given game he plays all five offensive positions for us,” Veneziano said. “We have been going with a smaller lineup so he has played down low a lot on defense.”

That change has led to a load of rebounds for Madeia, and his production has led to an improved product for the rebuilding Redcoats.

“Although they haven’t resulted in wins, the last five games we have played very well,” Veneziano said. “It’s been by far our best basketball of the season. Unfortunately, it was against some very good teams. But Jeff has been a huge factor in our improved team play over the last five games.”