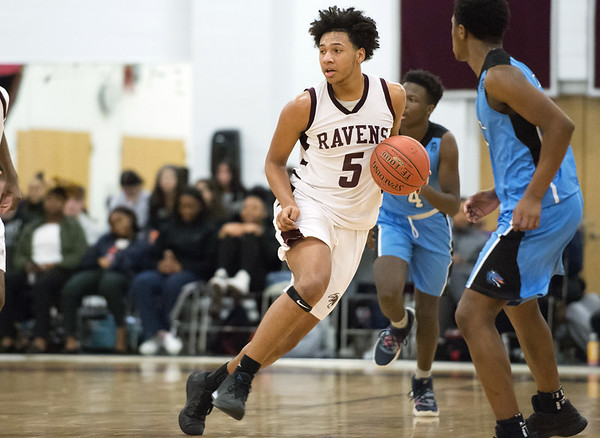 NEW BRITAIN - The Innovation boys basketball teamâ€™s domination over its CRAL opponents continues and it doesnâ€™t appear to be ending anytime soon.

â€śIâ€™m really proud of this senior class and how they have a banner of their own,â€ť Ravens head coach Matt Lance said. â€śIâ€™m happy they got to create their own story. We heard the rumblings that Innovation was going to be down this year because we lost a lot of our starters from last yearâ€™s state championship team.â€ť

Innovation (19-3) led 24-16 at the half and after extending their lead to 36-25 after three, looked to have the game in hand until Achievement First made a late push midway through the fourth quarter, outscoring the Ravens 17-10 over the final eight minutes of play.

â€śWe had been talking about defense wins you championships and we did that for three and a half quarters,â€ť Lance said. â€śWe let them back into the game in the fourth. But we have to play good defense. We didnâ€™t play well offensively. We missed too many shots and layups.â€ť

But Innovation was able to hold on for the win and with it, some momentum heading into the state tournament. The Ravens, after winning the Division V state title last season was bumped up three divisions to Division II this year. Theyâ€™re currently scheduled to be a top-three seed. But even with tougher competition looming, Lance and his team are embracing the challenge.

â€śI have the mindset and my guys have the mindset of wanting to play the biggest schools we can,â€ť Lance said. â€śWe scheduled our opponents this season with that in mind. We played Berlin, Bristol Central, Bulkeley, some of the bigger schools in the CCC. At the end of the day, what we need to do well doesnâ€™t change no matter who we play. We just have to play the way weâ€™re capable of.â€ť

Goodwin Tech 60, Bullard Havens Tech 50 (OT): The Gladiators pulled out a thriller on the road in the CTC Tournament semifinals, and are marching on to the tournament championship on Thursday night in Hamden.

The game remained close throughout, as Goodwin Tech clung to a 24-21 lead at the half and led by just one entering the fourth quarter. But the Gladiators were able to pull away in the extra period and set up Thursdayâ€™s clash with undefeated Prince Tech, who has won the tournament the past two years and was ranked No. 8 overall in the state in the latest GameTimeCT poll.

Goodwin Tech lost twice to Prince Tech in the regular season, both times by more than 30 points. Tipoff is scheduled for 6 p.m. on Thursday.