'This is my way of giving back': Isaiah Boddie ready to show why he was picked as New Britain's next head football coach 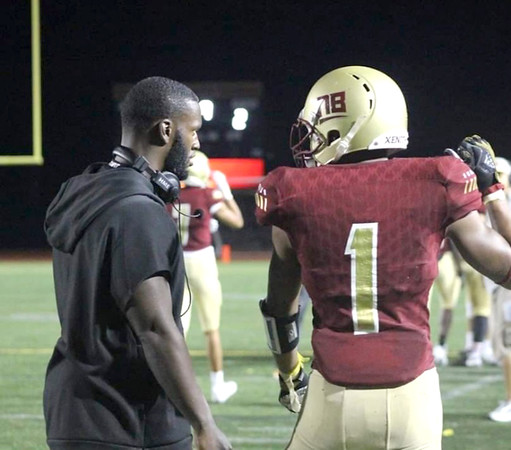 New Britain defensive coordinator and now head coach Isaiah Boddie, left, talks to one of his players before a game | Photo courtesy of Isaiah Boddie Buy this photo
Published on Thursday, 19 March 2020 20:26
Written by DAVID GLOVACH

NEW BRITAIN - Isaiah Boddie knows the New Britain football program and its fans are anxious for a fresh beginning and new start.

The Hurricanes haven’t won a state championship since 2004 to cap off a stretch of three Class LL titles in four years and have only two playoff appearances since 2007. Yet Boddie, a New Britain and Central Connecticut State graduate, believes he is the right person to help turn around what has historically been one of the greatest programs in the history of Connecticut, but has struggled more nearly two decades. He says he’s excited, grateful and blessed.

“All gas, no breaks,” Boddie told The Herald. “I think that’s my mentality, my coaching style, my philosophy. Not just on the field but in life. It’s about doing everything 100 percent and to your best ability and giving it everything you got.”

Boddie is slated to become the Hurricanes’ next head football coach, the school district announced late Wednesday night, replacing Tebucky Jones, who decided to step down from the position on Jan. 16 after nine seasons to spend more time with his family. It’s almost a done deal. All that’s needed is the New Britain Board of Education’s stamp of approval, which Boddie will likely receive, barring any unforeseen circumstances, at its next meeting on April 6.

If all goes as planned, he will be inheriting a team that struggled on the field in 2019, especially on offense, going just 2-8 after a 9-1 regular season and postseason berth in 2018.

“The superintendent [Nancy Sarra] will bring his name forward,” Athletic Director Len Corto said. “I’m not really comfortable saying anything else until it gets the board’s approval.”

Boddie was one of 24 candidates who put their name in for the opening, including former New Britain head coach Jack Cochran, who led the Hurricanes to those three Class LL state titles in the early 2000s. Cochran was the favorite choice of many of the city’s residents, as well as Mayor Erin Stewart, citing what he did during his short tenure in New Britain from 2001-04 and how he helped mold his players as students off the field. But he wasn’t necessarily a favorite to those in charge of the hiring process. Cochran and members of the New Britain High School administration, including Corto, and the Board of Education have had a contentious relationship, at best.

Yet it was Boddie who quickly set himself apart.

The list of 24 was quickly whittled down to 13 individuals who were interviewed by New Britain’s nine-member selection committee. From there, the committee then chose its top six for a second round of interviews, with Boddie coming out as the top choice. Boddie was then called by Corto earlier in the week to let him know the job was his should he accept it.

So what set Boddie apart from the others? Easy, he said. He went into the interviews prepared, most importantly, as himself.

“I care about the kids, I care about the program, I had a plan where I preached academics,” Boddie said of what set him apart from the other candidates. “We’ve been struggling at times with kids becoming eligible and staying on the team and I really honed in on my ideas and my vision of academic excellence and academic success along with having success on the football field, and holding kids to a higher standard in not just being eligible under the CIAC, but also with the NCAA clearing house. But also being a family. Sometimes we lose sight of how much a family atmosphere is needed to play football. You’re playing for each other. You look at [Minnesota head coach] P.J. Fleck, he uses the saying, ‘Forget about me, I love you’ and that’s what family is and the kind of culture we’re trying to bring to New Britain.”

If there are any questions regarding Boddie’s hire, it comes down to experience, or perhaps a lack thereof. At 30 years old, Boddie was also one of the youngest candidates to apply for the New Britain job. This fall will be his eighth season coaching at the high school level. He spent five seasons at Cheshire, including three as the Rams’ defensive coordinator under Don Drust, and the last two seasons leading New Britain’s unit under Jones’ tutelage.

But Boddie believes what he may lack in seasons, he makes up for with the situations he’s been in.

“People may say I’m young and I’m inexperienced, but I can disagree with that with the way I’ve prepared for this moment and the way my coaches have prepared me,” Boddie said. “I’ve been around some of the best coaches. Jack Cochran coached me for two years, then I was coached by coach [Paul] Morrell. In college I was able to go to CCSU where we won two conference championships and I had some of the best defensive coaches possible. Coach [Jeff] McInerney, who is now with the XFL’s New York Guardians, was the head coach. Coach [Ryan] Neilsen, who is the defensive line coach with the New Orleans Saints, he was my defensive coordinator.

“I was blessed to learn from Buck. Buck is a quiet person, but he has a wealth of knowledge when it comes to football and X’s and O’s. He played under arguably the best coach of all time in Bill Belichick and I was lucky to get the knowledge from him. … Coach Drust had a huge influence on me. He was a general. Cheshire runs a phenomenal program and I was able to use what I learned there about running a program from the academics and football side of things. So the people I’ve been around my entire coaching career have prepared me for this moment and I’m always willing to learn more.”

Another important factor for New Britain’s hiring committee was someone who understood what coaching is like at a city school. Having spent two seasons on Jones’ staff already and as a graduate of the school, Boddie knows what it is like to grow up in New Britain and play at the high school.

After all, he’s done it already and been successful at it as well.

“My dad is a pastor and a huge pillar in the community,” Boddie said. “He has a drug and alcohol program for men and as a young child, I was always taught to give back and I think this is my way of giving back. This is my why and my reason. What way to make a bigger impact than in the place where you’re from. I’ve told the kids I walked the same halls as you, I drank the same water you drink.”

Of course, there is still a matter of putting his staff together. He wants to make sure those he brings in fits what he is trying to build. That means putting an emphasis on making the program as much of a family as possible as it is on the X’s and O’s. How the culture is built is important and Boddie knows this upcoming first season will be crucial to the foundation he wants to program to get set on. No options are off the table as of yet.

But he also knows he needs the support of the community as well.