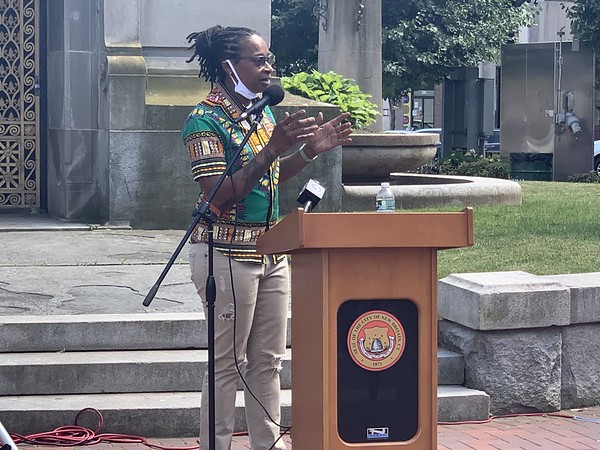 The African-American flag that was raised in Central Park as a celebration of Juneteenth. | Matt Hornick | Staff Buy this photo

In the wake of protests against racism and racial inequality in the United States, New Britain residents gathered in Central Park to celebrate Juneteenth by raising the African-American flag to fly alongside the American flag in the center of the city.

Juneteenth celebrates the last of the slaves in the United States being freed when Union General Gordon Granger arrived in Galveston, Texas to announce the federal order that slavery was no longer legal.

“The timing is near perfect,” event organizer Adrian Elliott said. “With all of the upsetting things happening in our day-to-day lives, I think a celebration of this outweighs [the sadness and fears].”

In addition to the flag raising there were musical performances, including a rendition of the Black National Anthem sung by Jordan Watson as the flag rose to the top of the flagpole, as well as the presentation of a declaration from Mayor Erin Stewart that recognizes Juneteenth as a holiday. Stewart was followed by elementary school student Mariah Cubano, who read a poem about her experiences growing up as a black person.

Elliott solicited Chris Porcher, Capt. Ricardo Mickens of the New Britain Fire Department and Sgt. Baron Dyer of the New Britain Police Department to speak at the event. She wanted black men in positions of influence who were able to share stories of experiencing racism, both while growing up and as adults, and how to overcome those prejudices and find success.

“I think it was important to speak today because I am born and raised in New Britain and I work in downtown New Britain,” Porcher, a program director at Community Mental Health Affiliates, said. “I think it’s good for our young individual, our minority population and the community in general to really see people participating in and celebrating the holiday that we deserve.”

Mickens spoke about growing up in Hartford and moving to Newington when he was in high school and it was at Newington High School that he experienced racism for the first time. He discussed how that event influenced him going forward as a member of the basketball team at Central Connecticut State University and then as he ascended to the rank of Captain in the NBFD.

“One of the things that I always talk about with my kids is accountability,” Mickens said. “When you’re a leader in an organization I think it is important not to shy away from difficult conversations, to be in the forefront of anything you can help to improve the community. I think the current climate warrants everyone taking a look in the mirror and seeing what we can all do to ease the tension that’s going on and make this a better place.”

Stewart said celebrating the holiday is a crucial part of spreading the experiences of African-Americans in the United States. Holding a larger event in town helps more people learn about a lesser-known part of American culture.

“It’s more important now than ever to recognize Juneteenth,” Stewart said. “To teach the history and to talk about African-American history in our country. We’ve been celebrating Juneteenth on an annual basis, in New Britain we celebrate it every year. Obviously there are more people here this year and that’s good, we need to bring more attention to the holiday and talk about why it’s important and what it did for our nation.”

Spreading the message of Juneteenth is a vital part of further educating American citizens about African-American history and many people never learn of the holiday until they are adults. Porcher sees these celebrations as important because it helps educate young African-Americans about their own history.

“It’s so important to bring the message to youth,” Porcher said. “When I look at my own experience, as an African-American male, I didn’t learn about Juneteenth until my late 20s. I think it’s so important to start delivering these messages to our young people so they know the history and help spread the history in a positive manner.”