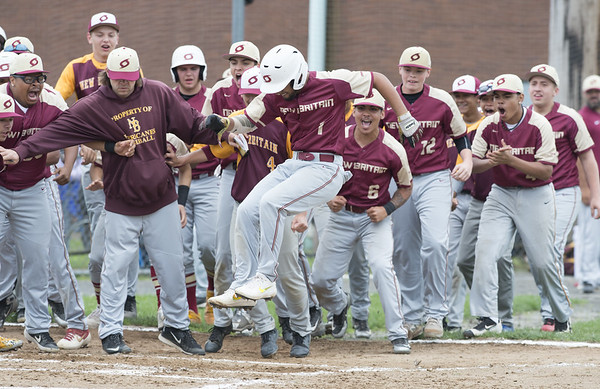 Southington defeated New Britain 4-3 in 11 innings on a walk off single by Billy Carr (17) in the continuation of a game suspended in the 10th inning due to rain on May 29th. Danniel Rivera (1) is mobbed by teammates after hitting a solo home run to temporarily give New Britain the lead. Wesley Bunnell | Staff Buy this photo
Published on Tuesday, 30 June 2020 17:23
Written by RYAN CHICHESTER

Former New Britain baseball star Danniel Rivera‚Äôs first collegiate season at Southern New Hampshire University was brought to an abrupt end when the coronavirus outbreak resulted in the cancellation of the College World Series, and eventually the collegiate seasons of all spring sports across the country.

Rivera, who signed on to play with the New Britain Bees in their first season in the Futures League, held out hope that he would still take the field in his hometown for the summer at New Britain Stadium, right next door to where he set the Hurricanes‚Äô record for runs scored. But when collegiate summer leagues in the area like the New England Collegiate Baseball League and the Cape Cod League were canceled for the season, Rivera‚Äôs hope began to dwindle.

‚ÄúThe Cape Cod League is the best summer league for college athletes, so I didn't think the Futures League was going to be intact,‚Äù Rivera said. ‚ÄúBut as soon as they said they were optimistic, that's when my hopes shot right back up. I was just hoping for the best.‚Äù

The Futures League was doing the same, delaying the season indefinitely but waiting as long as possible to make the potential decision of canceling it entirely. The league and Rivera‚Äôs patience was rewarded as COVID-19 cases began to decline throughout the state, and youth sports were making comebacks for the summer months. By May, the Bees were meeting with mayor Erin Stewart to discuss safety guidelines that would allow the team to take the field and begin the first season of a new era.

‚ÄúI found out we could have a season around the end of April or the beginning of May,‚Äù Rivera said. ‚ÄúWe started practicing around mid-May. I was really surprised there was a possibility of starting practice, but once I found out, I was ecstatic.‚Äù

Fortunately for Rivera, who ended his New Britain career with a go-ahead home run in extra innings against Southington in the Class LL state tournament, he didn‚Äôt let a shutdown of the sports world impede his preparation for a potential season, even if his hopes were shaken.

‚ÄúAs soon as we got sent home from college, I told myself I can't fall and be lazy just because all of this was happening,‚Äù Rivera said. ‚ÄúAs soon as I got home I continued to grind and practice every day. I made sure when I woke up every day that I got right to work. It's easy to fall into complacency. But what sets people apart from getting better is their work ethic, and I needed to get better at that through this pandemic and this time we have to ourselves.‚Äù

It was far from a familiar routine, and he would have much preferred to be practicing with his new team at SNHU to prepare for the Bees‚Äô 2020 season, but Rivera‚Äôs isolated practices were rewarded when the Futures League announced it would be beginning its season this Thursday.

‚ÄúIt was really challenging, but at the end of the day I made sure I got my schoolwork done and after that I made sure I went and practiced day in and day out and I had to motivate myself to get better, and when the coaches said it was time to get back on the field, I'd be ready,‚Äù Rivera said. ‚ÄúAt the end of the day, you always have to be prepared no matter what.‚Äù

Now, Rivera is preparing with his Bees teammates, as New Britain has been practicing together for nearly four weeks to prepare for the season. Right now, after worrying summer baseball would be lost, there‚Äôs nowhere else the Hardware City native would rather be.

‚ÄúKids aren't even practicing, and to start having team practices was a great feeling,‚Äù Rivera said. ‚ÄúI knew there was hope we'd have summer ball, and that's all I wanted. Our college season got cut short and we just wanted summer ball. Kids don't usually want to practice and complain about it, but with everything going on, we were so happy just to be able to practice.‚Äù

Practices will give way to games beginning Thursday night, when the Bees open their season at home. It won‚Äôt be Rivera‚Äôs first time playing at New Britain Stadium, but it just might be the sweetest, given the uncertainty that hung over his potential homecoming.

‚ÄúIt's great,‚Äù Rivera said. ‚ÄúIt's wonderful that I get to play in front of my home crowd and have my family and close friends come and drive like four minutes to watch me play. I was already used to that stadium from playing there throughout my high school career, and just the fact that I get to play in this type of environment and this type of time, I can't ask for anything better.‚Äù