Pets from far and wide are blessed by local church 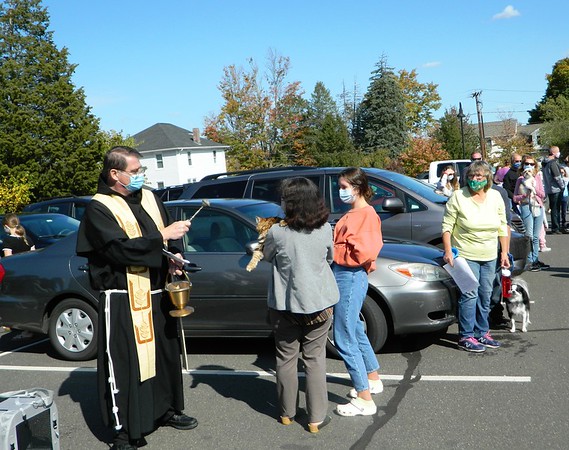 Erica Drzewiecki | Staff People wait to have their pets blessed with holy water outside St. Paul's Church in Berlin Sunday, during the annual Blessing of the Animals. Buy this photo

Erica Drzewiecki | Staff St. Paul's Parish conducts its annual Blessing of the Animals outside the church Sunday. Buy this photo 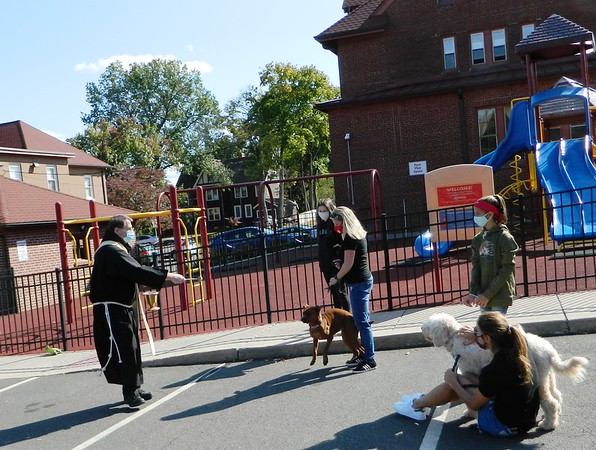 BERLIN – Cats, dogs, fish and even a hamster named Humphrey gathered in the parking lot of St. Paul’s Roman Catholic Church Sunday to be blessed.

Pastor Joseph Benicewicz led the animals and their human families in St. Francis’ Canticle of the Creatures, a short prayer service, before the Blessing of the Animals.

“Franciscan parishes like ours traditionally do this blessing,” he explained.

“St. Francis saw all creation as pointing us to God,” added Associate Pastor Michael Englert, who greeted parishioners and many of their pets by name as they arrived to the outdoor event.

Berlin couple Deb and Doug Sanders were joined by their dog Banner, a German shepherd in training to help veterans who have post traumatic stress disorder.

“We’re here to keep him as healthy as we can and have him blessed,” Doug said. “He’s got a very bright future ahead.”

Father and son Tim and Patrick Dolan, of New Britain, brought along their three cats, Fiona, Kora and Murphy.

All three have health problems the Dolans hoped to relieve through the blessing.

“Kora is the oldest in our house and Fiona and Murphy have genetic issues,” Tim said. “Hopefully they’ll be with us for a long time.”

Church members stood among their family groups with their pets, some of which greeted each other by sniffing and barking.

“Oh God, the author and giver of every gift, animals are also part of the way you provide help for our needs and labors,” the pastor said in prayer. “We thank you for your goodness that we see in them. We thank you too for the companionship that they may also provide us. And so we pray, asking that you bless all of these animals. Keep them healthy and safe until such time when their time on this earth passes.”

Southington resident Cindy Wagner had to carry her dog Sunny, just four months old and anxious being among so many other pets.

“We lost one dog last October and another dog in March,” Wagner said. “We look at her as a gift from God.”

Mike and Joanna Nowak and their three young sons arrived with their fish Goldie and hamster Humphrey. The boys also carried stuffed animals they brought from home to be part of the blessing.

“This is our first time doing this,” Joanna said. “It’s fun for the kids.”

It was also the first blessing for Pandi, a Shih Tzu that came with Regina St. Jarra.

“She’s five years old,” St. Jarra said. “Maybe this will quiet her down.”

Other churches across the region held their own Blessing of the Animals events over the weekend. They included Grace Lutheran Church in Plainville and First Church of Christ, Congregational in New Britain.

Erica Drzewiecki can be reached at edrzewiecki@centralctcommunications.com