Courtesy photo | The statue outside the Sphinx Shrine Temple in Newington, before it was broken recently by vandals. Buy this photo 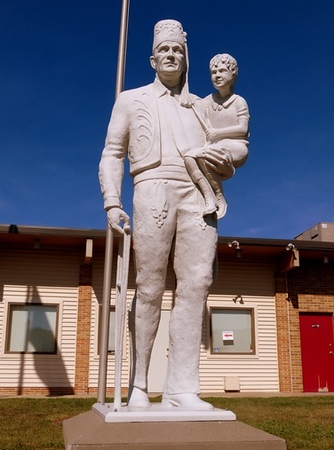 Courtesy photo | The statue outside the Sphinx Shrine Temple in Newington, before it was broken recently by vandals. Buy this photo

NEWINGTON – A statue representing the good works of a local organization has been irreparably damaged.

Standing outside the Sphinx Temple Shrine at 197 Deming St., Newington, the larger-than-life replica of a Shriner holding a child was recently dislodged from its base and decapitated.

“We’re frustrated and devastated that a symbol of our organization has been vandalized,” Sphinx Shriners Potenate Richard White told the Herald Monday.

He was informed of the news over the weekend, after the Shriners’ Motor Patrol discovered the statue while visiting the temple Saturday.

Past Potentate John Taylor notified Newington Police, who are investigating the incident.

“This is the third time something like this has happened,” Taylor explained. “The first two times they undid the bolts and tipped the statue over. This time they got the head off.”

Members regarded the statue as their “Editorial Without Words,” modeled after an internationally-recognized image illustrating the relationship the fraternal organization has with the Shriners Hospitals for Children.

The Sphinx Shrine Temple and members of the fraternity provide financial support to the Shriners Hospitals. Their temple is located on a quiet back road off of the Berlin Turnpike.

“We’re kind of tucked away in Newington,” White said. “I don’t know how they found us or why. I don’t think the people who vandalized it understood or appreciated what this statue represents.”

The Shriners are looking into securing their facility with surveillance cameras to prevent future acts of vandalism or at least target the perpetrators.

Past First Lady Lisbeth Mindera Herbert reached out to the Herald about the incident. She and other members are upset that the perpetrator has not come forward to take responsibility for their actions.

“This is a horrible destruction of the symbol of our charity done by cowardly vandals,” Herbert said.

Anyone with information about the incident is urged to report it to Newington Police, at 860-666-8445.