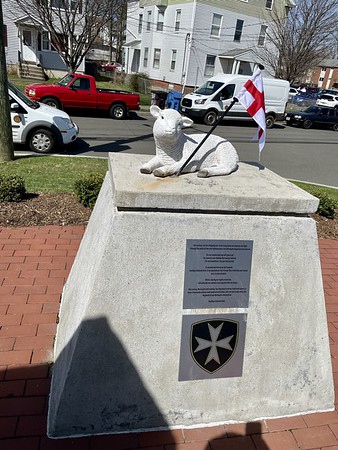 Mayor Erin E. Stewart was the maser of ceremonies at the Borinqueneers Day Ceremony Photo Provided by Ciara Hooks Buy this photo

NEW BRITAIN – Rev. Carmelo Rodriguez Jr., president of New Britain Latino Coalition, opened the Borinqueneers Day Ceremony Wednesday morning in both Spanish and English as they commemorated those brave Puerto Rican soldiers who are honored with a monument downtown.

“We are so thankful for this city because this city always honors our veterans,” Rodriguez Jr. said. “We are so grateful for every single man and woman that has served or is serving and their families too.”

Mayor Erin Stewart, members of the New Britain Veterans Commission, representatives from the New Britain Latino Coalition and residents from the community gathered at the Borinqueneers Monument located at 246 Beaver Street to honor the 65th Infantry Regiment.

Miguel Pagan, New Britain High School Madrigal singer, opened the official program with the singing of the National Anthem followed by the Presentation of Colors. James Soder was the commandant, John Reek was the commander, Funeral and Honor Detail & the Marine Corps League, Hardware City Detachment.

“We join in heart to keep the remembrance acknowledgment and respect of the heroic and selfless acts of all the 65th Infantry Regiment heroes. They defended and protected the freedom of others in foreign lands and did it with courage. Today we assure their legacies and sacrifices are etched in our hearts,” said Rev. Joel Cruz Jr. in a prayer reading.

Stewart also pointed out the courage shown by the 65th Infantry Regiment.

“It was exactly one year ago many of us stood here before you and officially proclaimed April 13 as Borinqueneers Day here in the City of New Britain, which I will do again later today,” Stewart said. “But this day each year is dedicated to recognizing the significant contributions of the soldiers who made up the 65th Infantry Regiment. These men volunteered to defend our country and fought courageously on behalf of the United States in both World Wars and also the Korean War. The members of the 65th Infantry Regiment, unfortunately, often faced unequal treatment and discrimination but never let that deter them from the love of our county and their sense of duty.”

“It’s an honor being here. Several of my family members served in the Borinqueneers. I think the first Puerto Rican Commander of the Borinqueneers, he was a relative,” Alderman Angel Segarra said. “As a veteran of the military I can tell you that the soldiers do not always know what they are sent to fight or for what purpose, but he hopes that his sacrifice means something. The Borinqueneers gave their lives like so many American soldiers but it wasn’t in vein.”

The Borinqueneers garnered Purple Heart medals and many other combat awards.

“I went to my colleagues and I said we need to honor the Borinqueneers and they said, ‘the who?’ and I explained to them the story of Patriots, the Borinqueneers are Patriots, who fought for a country that didn’t treat them as first class citizens and yet they fought,” Senator Richard Blumenthal said.

In April of 2016, the regiment was awarded a Congressional Gold Medal.

“For me the day that should really be commemorated is June 10, 2014, the day this act was signed,” Blumenthal said. “President Obama was backstage and we had some of the Borinqueneers with us. The president was seated and we went in to meet him and, all of you know, the Borinqueneers can light up a room. The president had a grin a mile long when he saw these guys and they started talking to him and he could’ve spent the rest of the day talking to these brave veterans. It is that spirit that we really celebrate today. That spirit of heroism and patriotism that the Borinqueneers represent.”

New Britain has over 25 monuments throughout the city including the Borinqueneers honoring those who have served in wars throughout history.

“We believe strongly in honoring those who answer the call to serve our great county,” Stewart said. “Solely, this monument behind us serves as a constant reminder that the sacrifices made and adversaries that were overcome by Puerto Rican and Hispanic service members are never forgotten and always appreciated here in the city of New Britain.”

Stewart read and presented Walter Santana with the official proclamation.

“My grandfather, I’m not sure if he was a Borinqueneers or not, but he served in WWII and the Korean War as a combat engineer,” said Santana, a veteran. “Many years later I served in the Army. I was not a hero but I got to serve in the Special Operations Unit and I also served in Korea for a year. If you read the history of the Borinqueneers some of those units still exist and they’re still doing the same training and still protecting the same people.”

“I served with the memory and pride of those who have gone before me, for they left to fight, fought to win and would rather die then quit – that’s what the Borinqueneers did many times many years ago and we should all be proud of them,” he said.

Rev. Victor Gomez provided the benediction to close out the ceremony.

“This is an honor to always celebrate our Borinqueneers,” Rodriguez Jr. said. “We celebrate them today as a holiday but we are honored to celebrate them every day and every hour.”