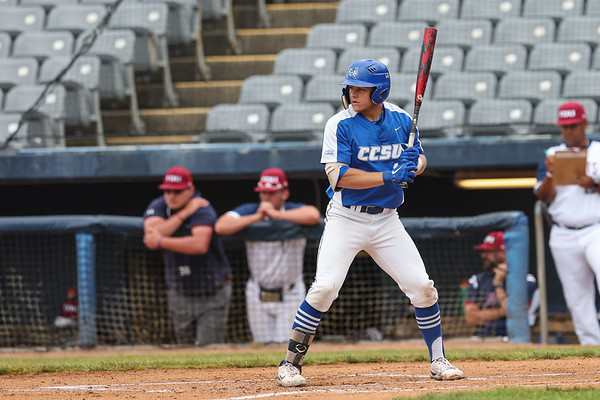 During the summer of 2020, Central Connecticut State University second baseman Dan Covino found himself running hill sprints in his backyard and building his own squat rack out of concrete and wood. After batting a combined .113 through his first two seasons, Covino was “stuck at home doing whatever [he] could do to get better.”

A season cut short in 2020 served as Covino’s launching pad to now being named as a member of the All-NEC First Team, All-ECAC First Team, All-New England Second Team and NEIBA All-Star Team in 2022. He’s also been able to get his foot in the door for potential opportunities at a Power Five conference in his final season of eligibility.

“There were literally no days off,” said Covino about the summer of 2020. “That’s where I took my edge and I’ve seen the hard work payoff these last two seasons.”

After an admittedly bad start to his collegiate career, Covino knew the level of play he was capable of and never wavered from that mindset.

The results began to show in 2021 when he leapt up to a .295 batting average while hitting four home runs and tallying 31 RBI in 36 games. That season the second baseman earned his first all-conference accolade being named to the All-NEC Second Team.

Fast forward to 2022 and Covino has established himself as one of the best collegiate players in New England. His .328 batting average, 1.020 OPS, nine home runs and 59 RBI were hard to gloss over even for him at times this season.

“I think I’d be lying if I said [a potential all-conference selection] wasn’t on my mind,” Covino said. “But it for sure wasn’t at the forefront. We were looking to win another conference tournament which has always been the goal.”

Covino’s methodical rise has continued into his summer ball with the Keene Swamp Bats of the New England Collegiate Baseball League. The infielder is one of just three players in the NECBL batting above the .385 mark. He also sits second in hits with 19 and OPS at 1.010.

With just under a month until the MLB Draft, the Connecticut native is keeping his fingers crossed that this is the year he gets his call to the pros. If the MLB doesn’t come calling this summer, he’s already set that goal at the top of his list for his final season in 2023.

Where that season will be played, however, remains up in the air.

After entering the transfer portal, Covino is keeping his options wide open.

“There are some Power Five opportunities that I’m exploring at this time but I’m not keeping [CCSU] out of it,” Covino said. “They were nice enough to welcome me back if that’s an option.”

The Blue Devils were the only school to extend a scholarship offer to Covino coming out of high school, which is something he’s keeping in mind throughout this process. He noted he’s thankful for the opportunity CCSU was able to provide, but believes it’s time for him to take the next step in terms of his competition.

In the meantime, Covino will continue to focus on reaching his highest potential as a player. The same as when he was using his concrete and wood squat rack in the summer of 2020.