Apple Harvest Festival gets off to a strong start 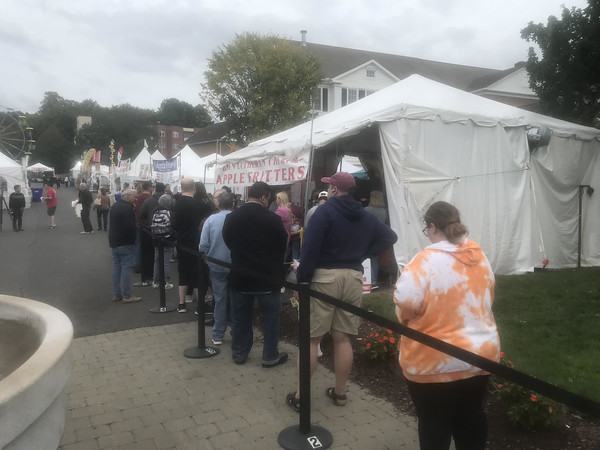 SOUTHINGTON – The 53rd Annual Apple Harvest Festival got off to a strong start Friday as visitors flocked to downtown to enjoy a weekend of food and fun.

The festival, which is held annually on Main Street and Riccio Way near town hall, is a fall tradition that Southington residents and visitors from surrounding towns look forward to every year – sometimes drawing as many as 100,000 visitors between the two weekends.

People line up around the block to enjoy the famous apple fritters at Zion Lutheran Church or enjoy a multitude of other savory foods at booths from town non-profits and restaurants. This Friday was no exception, with other food offerings including Thai chicken, Philly cheese steak, sausage and pepper grinders, grilled cheese, loaded tater tots, seafood, pizza, beef jerky, Polish foods, meatballs and more.

“I like the fritters – they’re excellent,” said Kristina Szewczyk, who said she has been coming to the festival for years.

Michelle Travinski, who brought her children Jake, 10, and Nate, 6, to the festival, was handed a bag of giant fritters to sample by the Zion Lutheran Church.

“I love the fritters,” she said. “I used to work in this area and I got pregnancy cravings for them. Now I live in Berlin and I still come back for them.”

Tim DeMerchant, who has been coming to the festival for five years, was also among the first at the fritter booth.

“I come every year to see what’s new,” he said. “I love the chicken and the fritters. It’s a nice community event.”

Kristi Wright had come to the Apple Harvest Festival since she was a kid. This year, she is also a vendor with her new pop-up business RX Crystals.

“The food is always good and I love the atmosphere,” she said. “It’s dangerously fun.”

Several vendors at the Apple Harvest Festival thanked the community for their continued support.

David Daddona, a volunteer with UNICO’s sausage and pepper grinder tent, has been manning the booth for 12 years.

“I look forward to the Apple Harvest Festival every year,” he said. “I like the music and the food and you get to see a lot of people you haven’t seen all year. It’s hard work but people really love the sausage and pepper grinders and tell us how good they are. I couldn’t do it without the help of the rest of my crew.”

Steve Nyerick has been volunteering at Alex’s Lemonade Stand at the Festival for 17 years. The booth helps to raise money for pediatric cancer research. Volunteers provide lemonade to the Zion Lutheran Church booth, who in turn give them fritters. Nyerick said that Zion Lutheran Church has the “nicest people ever.”

“Between both weekends, we have probably 400 students from DePaolo Middle School helping out,” he said. “It’s a great chance for them to give back and to help someone in need. They might even help to save a person’s life.”

This year’s festival has more than 70 vendors. In addition to live music, other attractions included Bradley Mountain Farms’ “Fairy Goat-mothers.”

“People get to play dress up with the goats, brush them, give them treats and cuddle with them,” said Melissa Allard, of Bradley Mountain Farms. “The community loves to come out and see the goats and they love to meet everybody.”

Next weekend’s entertainment will include illusionist David Garrity performing Oct. 7 at 5:45 and 7:30 p.m.

The Apple Harvest Festival will continue this Saturday and Sunday and then return Oct. 7 through 9.

Friday night’s entertainment included a laser light show. Saturday there will be an apple fritter eating contest at noon and fireworks at 9 p.m.

There will be a kids’ zone at the former Bank of America parking lot for the first weekend of the festival.

A children’s carnival will run both weekends of the festival.

For a full schedule of entertainment can be found at southingtonahf.com.

Shuttle buses will be provided from Southington High School to the festival and back on both Saturdays and Sundays.