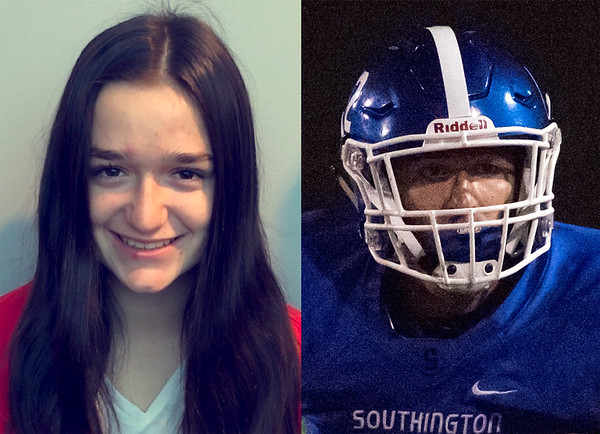 Fall seasons are already entering the final month before postseason play, and area teams are looking for standout performances to solidify playoff spots.

Berlin’s Kylie Jefferson and Southington’s Dillon Kohl are our Athletes of the Week for helping their respective teams inch closer to their goal of reaching the state tournament.

The beginning of the season was tough for the Berlin girls soccer team, as injuries to key players like All-State junior Ashley Wenzel put the Redcoats in an immediate hole. Facing a daunting schedule and a shorthanded roster, Berlin needed its healthy contributors to step up, and lately, the sophomore Jefferson has proven up to the task.

Needing a win following a 3-1 loss to Lewis Mills, Jefferson put home two goals in a 3-0 win over Middletown last Tuesday, and in a close 2-1 loss to a tough RHAM team the next day, Jefferson added another goal, the team’s only tally of the game. Jefferson, a returning starter, hadn’t found the back of the net heading into last week’s action, but now has three to her credit.

“Kylie has done more than step up, as she is becoming the most dangerous attacking player we now have,” head coach Alex Joslyn said. “I have not seen a defender in the CCC South who can stop her one-on-one due to her pace and technical ability.”

Jefferson’s efforts have helped the Redcoats survive injuries to crucial players, as the team now holds a 4-4-1 record. With seven games to go before the state tournament, Berlin is in position to qualify, and its chances will only increase if Jefferson continues to trend upward. According to Joslyn, the sophomore wouldn’t accept anything less.

“She is a coach's dream,” Joslyn said. “I probably am the hardest on Kylie when it comes to what I demand from her, but she knows how to respond to it and nobody is harder on Kylie than herself.”

That much was evident early in the season when Wenzel and her 25 goals from last season went down and the Redcoats needed every remaining body to prevent a bad start to the year. Jefferson, battling nagging injuries of her own, managed to help Berlin to a 3-1 record out of the gate, despite not being 100 percent.

“She is one of the toughest players we have,” Joslyn said. “She started out the year with a quad injury, then she finished a game with a severe deep bone bruise on her arm and she never once mentioned it to me or my staff to come out.”

Jefferson’s recent success has Joslyn excited for the rest of the year and the future, which will include the underclassman Jefferson, who just seems to keep getting better.

“I am extremely fortunate to have her for two more years and the sky is the limit when it comes to what she can accomplish,” Joslyn said. “I truly believe she is going to be a name to be remembered by the time she graduates and I am very confident she will be a key piece to at least one state championship team.”

The Southington football team has state tournament aspirations of its own, and running back Dillon Kohl’s performance on Friday night against Manchester had to make the Blue Knights feel even better about their postseason outlook.

When the final whistle blew in a 44-6 victory, the senior running back had racked up 24 carries for 246 yards and three touchdowns.

“I try to keep my body in the best physical condition I can,” Kohl said about his preparation prior to his big game. “We go through offseason workouts as a team and really just try and push ourselves to the limits to keep it going throughout the season. “

While Southington’s game against the Red Hawks saw Kohl rush for his highest total of the season, the running back has been able to find success all year.

On the season, Kohl has been the biggest offensive threat for the Blue Knights, racking up 768 yards and 10 touchdowns overall. He has averaged more than 150 yards on the ground per game.

But despite all his success, Kohl knows there are things he can improve on and gives all the credit to his offensive lineman.

“It’s really easy when the [offensive line] is moving people around like that,” Kohl said. “There’s only a couple plays where I couldn’t get past the line of scrimmage and it wasn’t always their fault. Sometimes I could’ve made a bad read. Me and M.J. [Bennett] just have practiced hard and have tried to master knowing where to go and what to do. The line is really pushing people around.”

As Southington enters their bye week, the team will look to fine tune and work on the little things that have led them to a 4-1 season. Continuing to focus on Kohl in the run game will be crucial for the Blue Knights as they look towards making the playoffs.