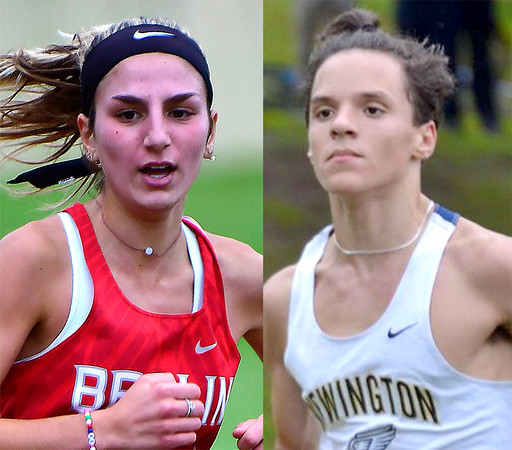 The boys and girls cross country state championships took place this past weekend, and a pair of local runners shined brightly against the top competition in Connecticut.

Newington’s Sam Geisler and Berlin’s Juliana Cancellieri are our Athletes of the Week for their memorable finishes on the most competitive stage of the season.

Geisler ran for the Indians on Saturday at Wickham Park in Manchester and just missed claiming an individual state championship. The junior took second place in Class L after finishing in second place at the CCC Championships earlier this season.

Geisler’s second-place finish earns him All-State honors for the second straight season, with still his senior year left to try and win a state title.

Thanks to Geisler’s All-State performance, Newington finished in third place as a team and qualified for the State Open by team time for the first time since 2006. After losing Aiden Toth to graduation last season, the Indians needed Geisler to step up as a leader of the team, and he did just that, winning the Nonnewaug Invitational in Woodbury earlier this season before making his claim as one of the top runners in the state on Saturday.

Geisler also makes himself known in the classroom as a consistent high honors student.

Cancellieri had plenty of her own success at Saturday’s state championships, coming in eighth place in Class M with a time of 20:15 to help Berlin to a third-place finish as a team. The Redcoats’ finish was the third top-five showing at the state championships in Cancellieri’s high school career, where she has certainly left a lasting mark.

“She is the type of runner that every coach wishes all their runners would emulate,” head coach Steve Soucy said. “She takes her training seriously, does the little things that add up off the course such as nutrition, stretching, strength and conditioning and rest. She also works with all our coaches and implements the race plan that we design before each race. She has that ability to put the plan in place and stick with it throughout the race without panicking or second guessing the strategy.”

Those qualities could be seen on Saturday and earlier in the season, when she won her first individual conference championship while helping Berlin to its fourth CCC South title since she arrived at Berlin High School. After shining as an underclassmen in her early years with the team, Cancellieri has blossomed into a leader on the course and has the credentials to show it, having now earned her third All-State honor thanks to Saturday’s performance.

“Juliana is a very team-oriented leader,” Soucy said. “She is always willing to put the team first and leads by example during not only the meets but more importantly in practice. She understands the importance of training throughout the season rather than only focusing on races. She helps make sure the team is ready to run fast when the meets really count at the end of the year.”

After becoming the only Berlin runner ever to earn back-to-back All-State honors, Cancellieri has continued to rewrite the school’s history books after this weekend, as she is now the only runner in program history with three All-State selections to her credit. Her cross country career with the Redcoats is winding down, but she will still have a chance to add more to her already illustrious career at the State Open, where she recorded a top-50 finish last fall, in a season where she won the school’s Coaches Award and was an All-Academic selection.

“All of her hard work and commitment has paid off and I couldn’t be happier for her,” Soucy said. “We have had many, many great runners over the years but she is the first and only three-time All-State runner we have had and the team is definitely going to miss both her running ability and leadership next season.”

The State Open will take place on Friday at Wickham Park. The girls are expected to begin at 2 p.m. with the boys starting at 2:45 p.m.