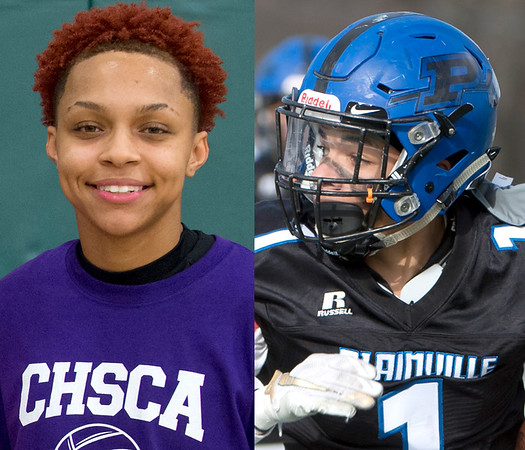 Fall seasons are coming to an end, and area athletes have been looking to either end those seasons on a high note, or keep them going for at least one more game.

Two local standouts accomplished their goals this past week in New Britain’s Raven-Symone Jarrett and Plainville’s Javan Paradis, and are this week’s Athletes of the Week for their performances against top competition.

The New Britain girls volleyball team’s season has been over since Nov. 11, but Jarrett has continued to pile up the accolades. Last Monday, the senior was named second team All-State for the third straight season, and hours later, she took the court at Maloney High School to participate in the Connecticut High School Coaches Association Senior All-Star Game.

Jarrett picked up six kills on the night, competing against the best seniors in the area, in a five-set thriller.

Jarrett’s All-State selection and All-Star nod were thanks to a season that saw her rack up 308 kills and 50 service aces for the Hurricanes, who reached the state tournament before losing in the first round to Darien in three sets. The postseason appearance was the third for Jarrett, who played past the conference tournament in all three years of her varsity tenure at New Britain.

Jarrett made her value to the Hurricanes known in her first state tournament appearance as a sophomore, when she picked up eight assists in a first-round loss to Conard, helping her to her first All-State nod. The outside hitter continued her success as a junior, earning her second straight All-State and all-conference selections, and did the same in her senior campaign.

The stakes weren’t as high in Monday night’s All-Star game as they were in the state tournament, but Jarrett still stepped up in big spots among the top talent in Connecticut. With the match tied at one apiece, Jarrett used a service ace to give her team the early lead in the third set, then picked up three kills, two of them bookending a 10-0 run, to get the set win and take a 2-1 lead in the match.

“It’s an honor to play in this,” Jarrett said after the All-Star Game. “Not everybody gets to play.”

Not everyone has had the career Jarrett has either, and with basketball and outdoor track seasons still on the horizon, the three-sport athlete still isn’t done leaving her memorable mark on the school’s athletic history.

Jarrett had the opportunity to play against the best in the state to close her season, while the Plainville football team was hoping to keep its season alive so it could compete with the best in Connecticut in the Class S state tournament. Heading into Thursday morning’s regular season finale against rival Wethersfield, the Blue Devils needed a win, along with some outside help, to seal a postseason berth. They got the outside help when Wolcott beat Holy Cross, and got the win with help from their junior wide receiver.

Clinging to a 14-7 lead in the second half, Paradis was called on for a screen pass from quarterback Christian Collin on third down and long from just over midfield. Paradis hauled in the completion at the line of scrimmage and broke two tackles while staying in bounds up the far sideline, scampering 47 yards to the house to give Plainville some much-needed breathing room in the form of a 21-7 lead midway through the third quarter.

The Blue Devils hung on for a 27-21 win, making Paradis’ playmaking ability on the touchdown reception even more massive.

Paradis ended the day with two catches and 55 receiving yards to go along with his clutch touchdown, which looked destined for short yardage at the start, until he shed a pair of defenders to extend Plainville’s lead and help lock up a coveted postseason berth.

Paradis wasn’t on the varsity roster last season, but has been vital to the Blue Devils’ success in 2019. In a win against Tolland earlier this season, he brought in a 21-yard touchdown reception against Tolland to pull the Blue Devils within two in the fourth quarter and set up a game-winning touchdown run by quarterback Christian Collin in the final minute of play. Without Paradis, Plainville might not have its two most memorable wins of the season, and might not be preparing for Wednesday’s Class S quarterfinals matchup with Bullard Havens Tech.