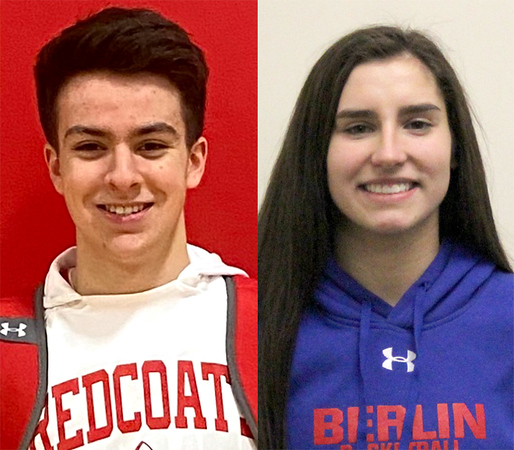 The Berlin boys and girls basketball teams find themselves in very different situations this season. One team lost almost all of its contributors from last season, while the other returned almost everybody. But both teams enjoyed memorable wins this past week, thanks to key individual performances, one from a returning starter and another from an underclassman who has been asked to play like a seasoned veteran.

Michael Ciarcia and Lyzi Litwinko are our Athletes of the Week for helping lead their Redcoats to crucial wins this past week, whether it was by way of a stunning comeback or to clinch a spot in the postseason.

The Berlin boys basketball team was facing a third straight loss on Wednesday night against the defending Division V state champions in Innovation, trailing by 14 at halftime and as much as 16 in the game before Ciarcia helped the Redcoats offense come alive in a second half surge.

Ciarcia, who finished with a game-high 21 points, was particularly clutch in the fourth quarter, draining a three from the corner with four minutes left in the game to pull Berlin within one, and after a steal on the ensuing inbounds pass, Ciarcia scooped in an open layup to give the Redcoats a 49-48 lead, their first of the game since it was 2-0 after the opening possession.

Ciarcia continued his clutch performance after another Berlin steal, knocking down a pair of free throws to cap off a personal run of seven straight points to turn a four-point deficit into a three-point lead. He also made four more free throws down the stretch when the Ravens went into foul mode, and finished a perfect 7-for-7 from the foul line to ensure that the team’s comeback wouldn’t be for nothing. When it came time to seal the win, the sophomore showed a veteran’s poise and made those crucial free throws when Innovation was trying to mount a late comeback of its own.

The victory for Ciarcia and the Redcoats was the team’s second of the season and undoubtedly their best so far, and with each win, Ciarcia has led the way offensively. In a win against Plainville during the Rybczyk Tournament, Ciarcia finished with a game-high 16 points, including three 3-pointers to help Berlin in its highest scoring output of the season so far. When the Redcoats offense seems to be at their best, Ciarcia is at the center of its production.

Though only a sophomore, Ciarcia is being heavily relied upon this season given the overwhelming youth and inexperience that currently makes up Berlin’s roster.

“I’ve asked a ton of that kid,” head coach Mike Veneziano said. “He’s had a lot of highs and lows, but no matter how he’s playing, he’s staying on the court. He has to play through it.”

The Berlin girls basketball team, unlike the boys squad, is loaded with experience thanks to returning four starters from last year’s state semifinalist group, and one of the Redcoats’ most experienced starters in Litwinko showed her leadership this past week, when Berlin was tasked with playing four games in seven days. Litwinko, showing no fatigue through the demanding stretch, filled the stat sheet and helped the Redcoats win all four contests, while also getting Berlin a spot in the state tournament with a win over Bristol Central on Friday.

Litwinko, an All-State selection last season, began the week in style on Tuesday night, recording a double-double behind 20 points and 10 assists in a win over Platt, then followed up that performance by nearly netting a triple-double, recording 22 points, seven assists and nine rebounds in a blowout win over Ellington. On Friday night against the Rams, the point guard closed out the week with 15 more points, the second-highest mark in the game.

Litwinko was expected to lead the offense this season, and with all-conference teammate Ashley Wenzel still out with a leg injury, she has been asked to take on even more. But that hasn’t seemed to be a problem for the senior, as she has led the Redcoats to one of their best starts to a season in program history. Opposing teams know her strengths, but especially last week, it wasn’t enough to slow her down.