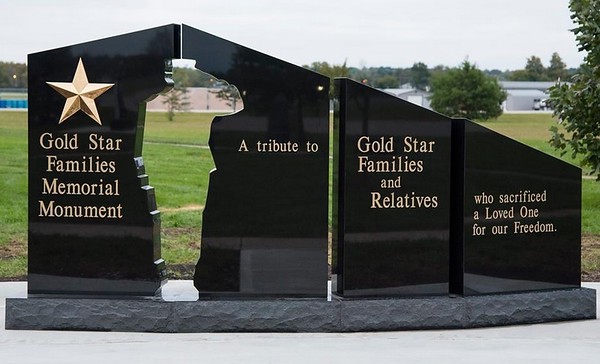 Courtesy photo | Hershel Woody Williams Medal of Honor Foundation -- The back of the Gold Star Families Memorial Monument, like the one that will be built in Berlin. Buy this photo

The committee first formed in 2018 after husband and wife Gary Roy and Marianne Mihalyo discovered the Hershel ‚ÄúWoody‚Äù Williams Medal of Honor Foundation and decided to champion the cause. Also longtime volunteers with the Iwo Jima Memorial Foundation, the couple made it their mission to bring a monument to Connecticut.

‚ÄúThis grant is going to take us a long way towards our goal,‚Äù Roy told the Herald Monday.

Connecticut‚Äôs Gold Star Memorial Monument Fund has now reached its halfway mark. The monument is estimated to cost about $60,000.

‚ÄúRight now we‚Äôre going to concentrate on breaking ground and getting the foundation in ‚Äì that‚Äôs the first step,‚Äù Roy said. ‚ÄúWe‚Äôre just opening up the doors now to people who really want to get involved.‚Äù

Volunteers hope people across the state will hear about the project or see it making headway and step up to help.

Those who lost a loved one in World War II began the tradition of pinning a gold star in the window of their homes.

Helen Keiser Pedersen is president of the CT Chapter of the American Gold Star Mothers. She met with the committee on the future site of the monument this past weekend.

Pedersen, whose son Captain Andrew Pedersen Keel was killed in Afghanistan in 2013, called the monument ‚Äúa granite of gratitude.‚Äù

‚ÄúThis is Connecticut‚Äôs duty, to respect and to honor the fallen and those left to remember them,‚Äù Pedersen said, speaking for herself, other Gold Star mothers and all of those left behind by a loved one‚Äôs ultimate sacrifice.

‚ÄúIt will be a necessary physical reminder that we are loved and appreciated by the citizens of Connecticut and I hope it will console families,‚Äù she added.

The Gold Star Mothers meet regularly to support each other in their sorrows and joys.

‚ÄúMy son was commander of a Green Beret team,‚Äù Pedersen said. ‚ÄúHe was just about to celebrate his 29th birthday.‚Äù

Retired Marine ‚ÄúWoody‚Äù Williams‚Äô founding mission was to give all the Gold Star Families the same monument to visit in every state, so no matter their zip code they would have an honorary place to visit and remember.

Roy and Mihalyo met him in Texas and were surprised to learn a monument had yet to be built in Conn. Then they took on the project, started meeting Gold Star Families and understanding what it would mean to them.

‚ÄúIt‚Äôs been an incredible journey,‚Äù Roy said, ‚Äúand it‚Äôs going to be remarkable to give these Gold Star Families a place to go to honor their loved ones.‚Äù

Donations can be made directly to CT‚Äôs Gold Star Families Memorial Monument at hwwmohf.kindful.com/?campaign=346773

AEFCU‚Äôs Cash Back to the Community program received a total of 205 nominations, with over 600 votes casted for the Gold Star Monument project. Grants of equal value were also awarded to Manchester‚Äôs Silk City Chorus and Hartford‚Äôs Police Athletic League.

Funding for the program comes from interchange income generated by credit and debit card fees.

‚ÄúAnnouncing our quarterly winners for Cash Back to the Community has become one of our favorite times of the year at American Eagle,‚Äù AEFCU President and CEO Dean Marchessault said in a press release. ‚ÄúNot only do we get to fulfill our mission of being community focused and connect our members to our philanthropic efforts, but we get to witness such great enthusiasm through the voting process and shine a light on the amazing work all the nominees are performing in our service areas.‚Äù