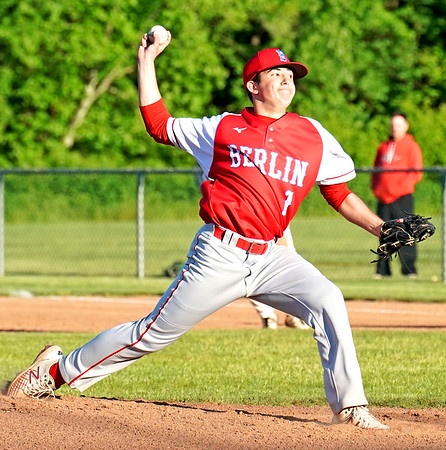 Berlin baseball is no stranger to state title games.

The Redcoats (21-3)will march into its seventh state final in Saturday’s Class L game at 7 p.m. ready to cap off their season with 14 wins in a row. On the other side is top-seeded Daniel Hand (20-1), an equally as talented team that held of Avon in the semifinals Wednesday with a 2-1 win in extras.

After knocking off Lyman Hall Wednesday night, word got around the second-ranked team in the state, Daniel Hand, was awaiting the sixth-ranked Redcoats.

“I hope it’s a premier matchup,” Berlin head coach Leo Veleas said after Wednesday’s semifinal win. “I hope our guy pitches well, I hope we play defense again, and we get some clutch hits. Hopefully it’ll be a good game. That’s all I can ask for. There’s no regrets. If we play well and we lose, we tip our hat to the other team, but when we play well, we’re not bad.”

“They were a great team,” Jamie Palmese said on hearing the matchup would be against Daniel. “I’ve seen them all over highlights and stuff but as long as we play our game we’re going to be fine. We’ve done it all season. We have great pitching, we have Connor Gileau coming back, he just threw a shutout against Windsor, he’s been pitching great. The bats are hot, so I think we have a lot of momentum.”

Berlin is the only returning team from the 2019 finals to go back to the finals. The strength of the 2021 season has had few blemishes, one being a loss to future first-round MLB Draft selection Frank Mozzicato of East Catholic. Berlin was no-hit that night.

Since then the team has won 13 in a row and not allowed a run in its first three Class L playoff games.

A big part of what makes Hand tick s Anthony DePino, a catalyst for the team who’s hitting .405 with 25 runs scored as of Tuesday. He’s also homered five times.

Along with DePino, leadoff man Colin Telford and Danny Weinstein have been big parts in their offense. Telford is second on the club in walks with 18 and Weinstein has 32 RBIs.

First pitch of the Class L final will come at 7 p.m. at Palmer Field Saturday night.