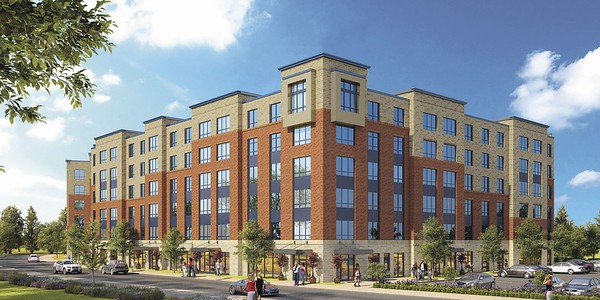 Buy this photo
Published on Monday, 8 May 2017 22:43
Written by CHRISTOPHER FORTIER

NEW BRITAIN - Funding for the first phase of the development planned for the former police headquarters site was confirmed Monday by state officials.

The Columbus Commons funding will support the first phase of construction, which will include 80 apartments and commercial space at street level.

The complex will include 64 units for households with incomes of up to 60 percent of area median income, including 16 supportive units and 16 at market rate.

With 120 apartments in two L-shaped buildings creating a rear courtyard, the proposed $55 million project would be the largest retail and housing construction endeavor the downtown area has seen in decades.

The Herald first reported on April 28 that CHFA funding was imminent for Columbus Commons.

The multifamily housing developments will create a total of 578 rental units, with 401 designated as affordable and 177 as market rate.

The properties are projected to generate 964 jobs, $333.5 million in economic activity, and $18.92 million in net state revenue, according to Malloy.

“Leveraging federal tax credits with other public and private funding will not only provide much-needed affordable housing for Connecticut residents, the construction and other work involved in bringing these new units online will generate jobs and economic activity in the state,” Malloy said.

By selling their tax credits to investors, developers can obtain equity financing to acquire, rehabilitate and construct new low or moderate-income housing.

Klein said applications are reviewed and scored based on the state’s Qualified Allocation Plan, which reflects the state’s housing priorities, including rental affordability, financial efficiency and sustainability, municipality commitment and impact, opportunity characteristics, and development team qualification and experience.

Funding was also approved for projects in Hartford, Bridgeport, New Haven and Windsor Locks and two in Meriden.

Christopher Fortier can be reached at 860-801-5063 or cfortier@newbritainherald.com.