Union 'hopeful' of deal that would avoid nursing home strike 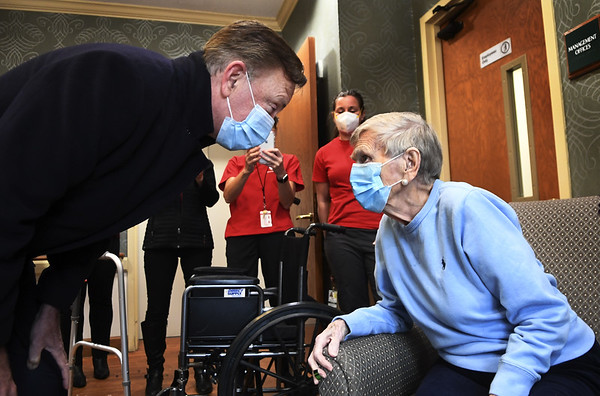 Gov. Ned Lamont greets Jeanne Peters, 95, a rehab patient at The Reservoir, a nursing facility, after she was given the first COVID-19 vaccination at the nursing home Friday, Dec. 18, 2020, in West Hartford, Conn. (AP Photo/Stephen Dunn,POOL) Buy this photo
Published on Wednesday, 12 May 2021 14:38
Written by SUSAN HAIGH

The union representing thousands of Connecticut nursing home workers poised to strike said Wednesday it's “hopeful” that contract agreements can be made, but said Gov. Ned Lamont and the General Assembly need to find more money to address the long-standing problem of low wages in these long-term care facilities.

Rob Baril, president of District 1199 New England, SEIU, said the union hopes to “extend and engage dialogue” with the owners of 26 nursing homes, even though the governor has said he's made his last best offer of an additional $280 million in state funding.

“So there needs to be some continued movement. And we are hopeful that the administration and the Legislature will put the priority on caregiving that it deserves.” he said during a news conference. “There are the resources that are available to help move people out of poverty.”

The union contends the 4.5% annual wage increase for the next two years under Lamont's offer would not be enough to establish a $20 per hour minimum for unionized certified nursing assistants, something that’s needed to attract more workers to the field. State funds, mostly in the form of Medicaid payments, make up 80% to 90% of the revenues at most of the unionized nursing homes, according to District 1199.

House Speaker Matt Ritter, D-Hartford, said Wednesday he remains optimistic that the union and management can reach an agreement and avoid a strike, but did not say whether the General Assembly would commit more funds to nursing homes beyond Lamont's offer.

Originally, 3,400 staffers were scheduled to walk out at 6 a.m. on Friday at 33 facilities. However, the union announced Wednesday it has delayed a planned strike at seven homes owned by RegalCare Management Group until May 28 because the company did not take the union's original strike notice “seriously” and only planned to “evacuate" residents to other facilities if there was a strike on Friday.

Now, about 2,800 workers at 26 facilities are set to walk off the job on Friday. The owners of those homes have arranged contracts with staffing replacement agencies.

Messages were left seeking comment with RegalCare administrators. A spokesman for the Connecticut Department of Public Health confirmed Wednesday the agency has not yet approved RegalCare’s strike contingency plans and has been trying to “exert pressure on RegalCare regarding its contingency staffing and care planning, and will continue to do so.”

Besides the RegalCare facilities, which employ about 600 affected workers, strikes are also planned on May 28 at six other homes.