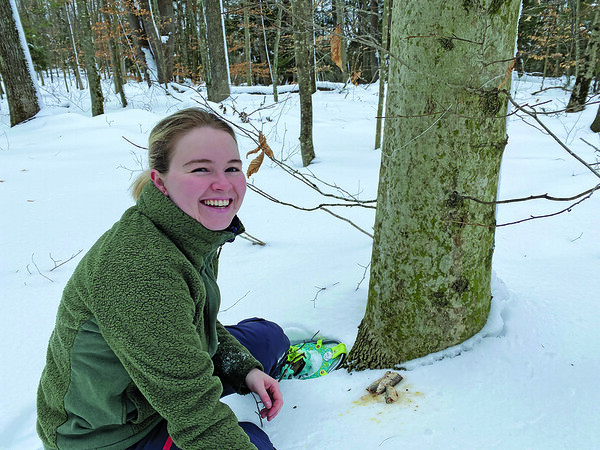 Katerina Gillis sitting at the base of one of her 'bait trees,' which is a tree she has previously baited with scent lures and sardines to attract wildlife. Sardines, which were broken out of a can by wildlife, can be seen on the ground at the base of the tree. Courtesy of Katerina Gillis. Buy this photo

A fisher recorded on a camera trap set by Katerina Gillis, which will provide her with valuable data for her master's thesis. Courtesy of Katerina Gillis. Buy this photo 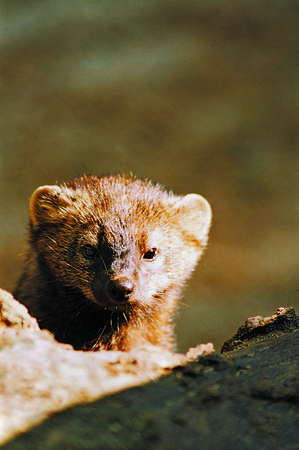 Connecticut‚Äôs obscure, elusive weasel is suspected to be in a state of decline.

However, that may not be the case for the Quiet Corner.

Here, they seem to be thriving at the Yale-Myers Forest.

In her plight to complete possibly the largest distribution study and camera survey of fishers in the state, Central Connecticut State University graduate student researcher Katerina Gillis discovered a promising population of fisher in the Yale-Myers Forest, which spans the towns of Ashford, Eastford, Union and Woodstock.

‚ÄúThis is really exciting to see her findings. We‚Äôre creating diverse habitats with our management and it‚Äôs great to see the evidence of that with finding evidence of fisher on the landscape,‚Äù Yale-Myers Forest Manager Jessica Lloyd said.

This mysterious creature of the night dons a shroud of myths and misconceptions that Gillis said she hopes to uncover and educate the public on.

‚ÄúThey‚Äôre definitely misunderstood animals,‚Äù Gillis said. ‚ÄúThey‚Äôre native, they deserve to live here as much as any other species and fishers just being present in the habitat really does help even out squirrel and rodent populations.‚Äù

Fishers, often inaccurately called ‚Äúfisher cats,‚Äù are what many mistakenly claim to be heard, due to the old wives‚Äô tale of the infamous ‚Äúfisher scream,‚Äù but not seen.

So, in 2018, Gillis slipped on her snowshoes, stuffed her research pack with cameras and set out to find them herself.

‚ÄúBack when I worked for DEEP (Connecticut Department of Energy and Environmental Protection) we would have a lot of questions about fisher and 'fisher cat' (such as) 'are they the ones yelling like a lady being murdered in my backyard?' We'd have tons of questions and that always made me super interested,‚Äù Gillis said during a recent research presentation.

She later noted fishers are actually very quiet and the screams people commonly associate with fishers are more than likely from a red fox or a raccoon.

‚ÄúThe aim of this study is really to find out exactly where they are and how many detections we can get,‚Äù she said.

Half the camera units were set west of the Connecticut River and the other half was set in the east.

Although her fisher distribution research is not complete, the data she has leads her to suspect fishers prefer to inhabit forests east of the Connecticut River and/or in northern Connecticut, along the Massachusetts/Connecticut border.

Three of those units, 18 cameras, were set at the 7,840-acre Yale-Myers Forest, which is notably one of the oldest sustainably managed forests in the country, according to Yale University.

‚ÄúYale-Myers was our first detection of the year and it was on Christmas,‚Äù Gillis said, after explaining each of the three detection units at Yale-Myers operated for one month at a time from December 2020 to February 2021.

‚ÄúThere were fishers on all of them,‚Äù she said, referring to the units.

Once completed and compared with prior research out of Vermont, Gillis hopes to have a better understanding of why they live where they do and what barriers exist in Connecticut that prevent fisher populations from moving and living throughout the entire state.

‚ÄúPart of my thesis is to talk about whether the Connecticut River is a natural barrier that‚Äôs not allowing them to move over to the west side,‚Äù Gillis said, after explaining fishers naturally came into eastern Connecticut by moving down from Massachusetts.

These carnivorous, predatory weasels are native to Connecticut, however they were extirpated, or considered locally extinct, from the state around 1870 because their soft, dark fur would sell for as much as $150 per pelt, according to the DEEP.

This, combined with the habitat destruction from forest clearing for agricultural and timber usage, led to the fisher's demise in Connecticut, according to state biologists.

In an effort to bring fishers back, the DEEP reintroduced fishers to the northwestern portion of the state, releasing groups of fishers in March 1989 and March 1990, according to CT DEEP records.

State biologists confirmed the reintroduction was successful after snow tracking and radio-tracking studies supported the released fishers stayed in the area and had high survival rates and successfully reproduced, according to the DEEP.

Fishers are now thought to be in decline in the state. However, there is limited research and documentation.

‚ÄúSightings were most prominent in the period near 2002-2004 and have declined since. There was a modest uptick in sightings in 2020 but that may have been due to efforts to increase public awareness of our sighting program,‚Äù DEEP wildlife biologist Paul Rego wrote in an email. ‚ÄúOther indicators of the level of fishers such as the number of vehicle kills and the number harvested during the regulated trapping season have also declined since the 2002-04 period,‚Äù Rego continued.

Gillis said her study, which could help determine future protection efforts and hunting regulations, will be the only study done since those initial DEEP studies encompassing the reintroduction efforts.

‚ÄúThe main importance of fisher is the fact that they are a native species here in Connecticut and it‚Äôs good to maintain our native species within the state, unlike red fox and coyote, which are not and are direct competitors, Gillis said.

To report a fisher sighting or report a vehicle-killed fisher, email observations to deep.ctwildlife@ct.gov. Be sure to include the date, time, location and any photos or video of the sighting.