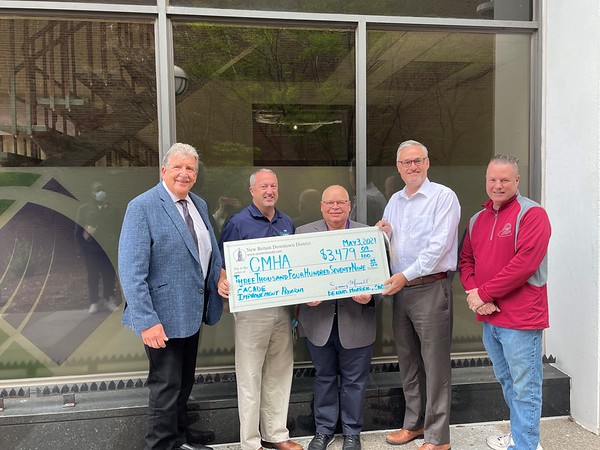 “We appreciate being recognized by the Downtown District for our efforts at improving and beautifying 233 Main Street,” said Raymond J. Gorman, President and CEO. “CMHA is proud to be part of the downtown and these new windows help to show that.”

CMHA utilized part of the funds to have privacy film installed on the windows of the walls that intersect on the corner Main and Bank streets.

“We wanted to give it a nice professional look,” said Amy Ogle, development & community engagement manager. “We had it installed about three weeks ago and it looks really nice.”

The privacy film was installed by Go Graphics out of Massachusetts.

“Also, the sign we’re standing in front of in the picture, we added a logo because that’s what you see when you’re walking in the building, so you will know you are at CMHA,” Ogle said.

CMHA is not new to NBDD’s programs, not only because they are members, but also because back in 2019 the NBDD helped pay for the addition of the 233 Main signage on the front of the building.

“It’s something they do for all the downtown businesses that if you’re making improvements, if you’re building or adding signage, they will pay for half of it depending on how much funds they have available,” Ogle said. “We’re grateful for the Downtown District for supporting CMHA, as always we’re proud to be a member and happy to be downtown.”