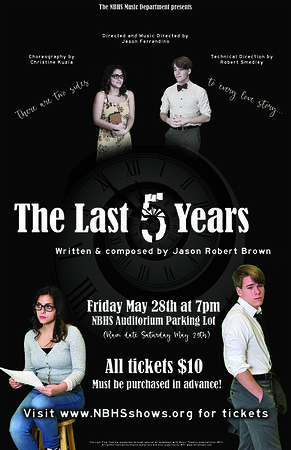 The performance will take place Friday, May 28. Guests can pull up to the New Britain High School parking lot at 110 Mill Street at 7 p.m. to enjoy the show.

ŌĆ£There is a side parking lot on the side of the auditorium where weŌĆÖre going to set up some of our risers to build sort of a small stage,ŌĆØ said Jason Nicolo Ferrandino, director of the musical and choral director at New Britain High School. ŌĆ£WeŌĆÖre encouraging people to bring their own lawn chairs and set up wherever they like; we will have some chairs available if needed.ŌĆØ

The Last Five Years is a small-scale musical written and composed by Jason Robert Brown. The show tells the story of the relationship between Cathy Hiatt and Jamie Wellerstein through five years of their life, spanning from their first date to the end of their marriage.

ŌĆ£The twist to the story, or at least the way the story is told, is that JamieŌĆÖs story goes in chronological order from the beginning to the end throughout the show. But CathyŌĆÖs story starts at the very end of the relationship and each progressive scene she goes backwards in time until theyŌĆÖre in the finale and she is at their first meeting,ŌĆØ Ferrandino said. ŌĆ£So, the songs go back and forth and sort of weave the story as they go.ŌĆØ

There is no dialogue, as the entire story is told through song.

ŌĆ£One way I described it to the kids is, as opposed to some shows like this, they are thought of as a home movie of their relationship; itŌĆÖs really more of flipping through a photo album. Each song is like a specific moment and she just happens to be looking at her moments in the reverse order,ŌĆØ Ferrandino said.

ŌĆ£These kids are doing a fantastic job; it is not an easy show, musically or dramatically,ŌĆØ Ferrandino said. ŌĆ£From my point of view, it is one of the most difficult scores IŌĆÖve played as a pianist; itŌĆÖs very tricky and constant.ŌĆØ

Ferrandino says they have been rehearsing for the show a couple times a week since the closing of their last production ŌĆ£Nunsense.ŌĆØ

ŌĆ£ItŌĆÖs been fairly straight forward putting this one together because it is such a small intimate group, just the two singers and myself at the piano, so itŌĆÖs not too much worry about. WeŌĆÖve been able to rehearse completely in person in the big choral room ŌĆō no problems there,ŌĆØ Ferrandino said. ŌĆ£And because weŌĆÖre performing this outside here at the high school, and the nature of the show ŌĆō theyŌĆÖre in their own little world in their timelines ŌĆō theyŌĆÖre never closer than 12 feet when theyŌĆÖre singing so weŌĆÖre going to be able to perform without masks, which really helps them show the emoting, acting and getting across to the audience, so weŌĆÖre excited about that.ŌĆØ

Tickets are limited due to safety regulations, so all tickets must be purchased in advance. No tickets will be available the night of the performance. All participants must also follow all CDC and New Britain Health Department guidelines while in attendance. Tickets are $10. For more information or to buy tickets call 860-225-6300 x1632 or visit nbhsshows.org.