'It was the right time': After nine seasons, Tebucky Jones steps down as New Britain head football coach 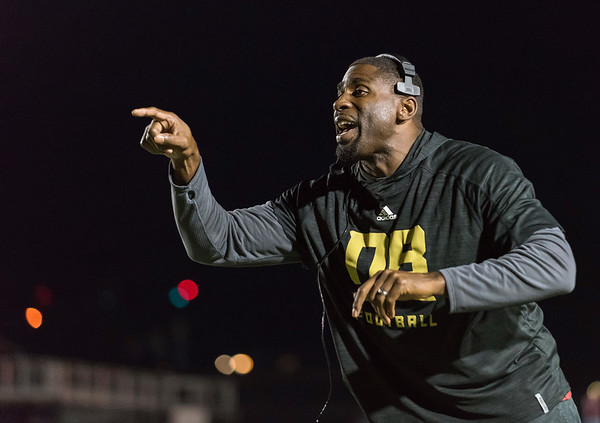 NEW BRITAIN — Tebucky Jones had been thinking about it for a while. On Thursday, it became official.

After nine seasons coaching his high school alma mater, Jones has decided to step down as the head football coach at New Britain High School.

“My journey’s over,” Jones told The Herald. “I had a great time. I enjoyed my time here and I enjoyed coaching the kids. Time for me to relax and spend more time with my family.”

Jones said he had been thinking about stepping down since as early as this past season, but coached the Hurricanes in 2019. He informed New Britain of his decision a few days ago, but said it was not an easy one.

“I was nervous,” Jones said of telling school administrators of his intentions to step down. “I had to make sure I had the guts to do it.”

One of the greatest athletes to come through New Britain, Jones starred for the Hurricanes from 1989-1992 and rushed for more than 4,537 yards and 53 touchdowns during his high school career. During his senior season, Jones ran for 2,100 yards and 25 touchdowns to lead New Britain to the 1992 Class LL state championship, the program’s first CIAC state title.

He then played for Syracuse before being drafted 22nd overall by the New England Patriots in 1998. An eight-year NFL career with the Patriots, New Orleans Saints and Miami Dolphins followed with Jones winning Super Bowl XXXVI with New England in 2001, the first of the team’s six Super Bowls. Jones last played in the NFL in 2005 and in 2011 was hired by New Britain to be its football coach.

“Tebucky is a legend and a hometown hero who will always hold a special place in the history of New Britain football,” Athletic Director Len Corto said in a statement. “We thank him for giving back to the city and program he came from by working with our kids and showing them what the pride and tradition of the New Britain football family is all about.”

Jones led the Hurricanes to two postseason berths, one in 2014 and one in 2018. In 2018, New Britain went 9-1 during the regular season before losing in the first round of the Class LL playoffs to eventual champion Greenwich. The Hurricanes went 2-8 this past season and Jones finished with a 48-43 career record.

“That was probably my favorite team,” Jones said of the 2018 squad. “Just to watch them play and watch them win, how they went through the ups and downs early in their high school careers and to have a great senior season, it was great to see. That was a group of kids that stayed together and played together through Pop Warner and came up to the high school to play together.”

But Jones’ time back at New Britain hadn’t always been smooth. Jones resigned after he said he heard that he was going to get fired three years and a 13-17 record into his position as head coach. The decision resulted with his then-players gathering 500 signatures in support of Jones and a two-hour meeting with then-New Britain Superintendent Kelt Cooper and Corto. Jones ultimately returned only for talks of him being replaced began again early in 2017.

Even through that, Jones never admitted that bothered him. He said his only concern was for his players.

“People who are negative have their own issues,” Jones reflected. “Of course, jealously of some sort comes into play. But at the end of the day, I’m here for the kids. I’m not here for all that other stuff.”

Jones isn’t sure who will be replacing him as New Britain’s next head coach, but said he’ll still be around the school in some capacity going forward.

“I love football,” said Jones, who runs an annual youth football camp in New Britain. “I love coaching. I love being around these young kids. They’re with us more than they’re at home. This is one of the best things I’ve done, to play here, go off to college and then the NFL and then come back. I’m going to miss it, but it was the right time.”