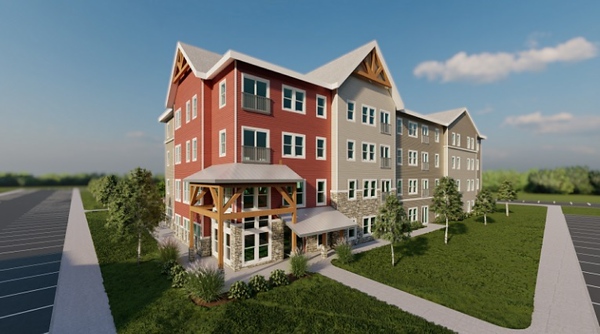 Market Square Architects | An architectural rendering of the apartments proposed to be built at 3333 Berlin Tpke., Newington. Buy this photo

Courtesy image | Grossman Development's rendering of the retail component proposed to be built at 3333 Berlin Tpke. Newington, from a leasing brochure the company released. Buy this photo

NEWINGTON ā A major mixed-use development project billed as āMeadow Commonsā is now being considered for a vacant 25-acre property on the Berlin Turnpike.

Massachusetts-based Grossman Development Group submitted its plans and petitions for five special permits to the Newington Town Planning & Zoning Commission (TPZ) which will hold a public hearing on the project during its regular meeting Wednesday night.

A 43,000 sq. ft. grocery store will anchor the commercial side of the property, where specialty shops, a restaurant, brew pub and fitness center are also planned.

Town Planner Renata Bertotti reviewed the plans and has given them her stamp of approval, and now it is up to the TPZ to decide their ultimate fate.

āFrom a staff perspective I believe this is a good project for the town of Newington and I support it,ā she told the Herald Tuesday. āMy general feeling about this project is that it is really going to work well for the town. The site layout, the design, the uses proposed ā all of it is compatible with the area.ā

In her memo to the TPZ, Bertotti confirmed the development proposal meets local zoning regulations and would be consistent with the townās 2020-2030 Plan of Conservation and Development.

A municipal fiscal impact and economic impact analysis report prepared by Goman & York Planning and Design estimated the town will collect $774,199 in net-positive tax revenue from the completed development. While property taxes are projected to be close to $1.2 million per year, the estimate factors in town services required on the property and 57 school-age children expected to live in the apartments.

The firm also calculated the project creating 170 construction jobs and 242 permanent jobs, and generating $4,658,219 in new consumer spending in local businesses. The propertyās appraised value would increase from $3,902,000 to $65,478,119, according to the companyās estimates.

Plans call for five commercial buildings on 11.6 acres with frontage on the turnpike. The housing would be located on 13.3 acres fronting Pane Road. The State Department of Transportation is now reviewing proposed signal and traffic improvements.

The TPZ has the ability to act on the application as early as its Wednesday night meeting, but will likely hold off on any decisions until future meetings due to the size and scope of the project.

This meeting will be presented as a Zoom webinar, with no in-person attendance. Information on how to attend virtually will be posted on the townās website at newingtonct.gov/virtualmeetingschedule .