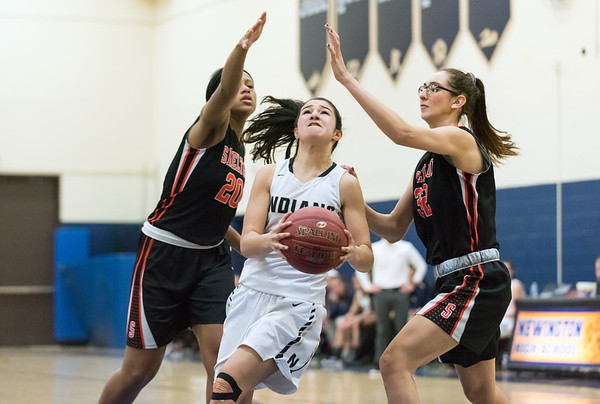 NEWINGTON - Ashanti Frazier and Marc Trancedi know the history. They‚Äôve seen some of the numbers.

That was the winless drought the Newington‚Äôs girls basketball team had suffered through in the state tournament prior to Tuesday‚Äôs Class LL first-round victory over Shelton, a 54-50 overtime thriller.

Since 2010, when the No. 27-seed Indians upset No. 6 Bacon Academy in Class L first round, it had been a long slide of playoff failures, and the program‚Äôs list of postseason history features eye-popping blowouts and brutal near misses.

Following the 2010 triumph, the Indians lost back-to-back first-rounders by five points each, one coming in overtime. Those were followed by losses of 16 and six points, respectively, in 2013 and 2014 before four consecutive defeats by 16 points or more.

What made the losing skid perhaps even more frustrating was Newington‚Äôs strong history of regular-season success.

The program has reached the state tournament in every season since 2003. That‚Äôs 17 consecutive postseason berths, 16 in Class LL, but just one Class L victory to show for it. And despite all those frustrating finishes, if Tuesday felt different for Frazier and company, well, that‚Äôs because it was.

‚ÄúWe walked in [the gym],‚Äù Frazier said, ‚Äúand I said, ‚ÄòThis is a big game. Not only is it the state tournament, but we have a chance at winning, and it‚Äôs at our home gym. We have a home-court advantage. Let‚Äôs go into this game as hard as we can.‚Äô We didn‚Äôt do that, but next game we will.

‚ÄúI know in previous years Coach [Rick] Bangs - good coach, phenomenal man - every year he coached, we‚Äôd never won. He always stressed how big it is for us to come out [and win]. In previous years, we‚Äôve been the underdog, and now we‚Äôre the seven seed. We‚Äôre somewhat on top, and we‚Äôre still striving to get to Mohegan [Sun Arena].‚Äù

Trancedi, the Indians‚Äô first-year coach and Newington graduate who played for the boys basketball team, guided the team to one of its best seasons in program history. The Indians earned a No. 7 seed and home game in the state tournament during a 20-win season that included a trip to the CCC Tournament championship game.

In their previous 16 tournament appearances, the Indians hosted just two playoff home games - 2004, a four-point loss as the 11th seed and 2007, an overtime loss as the 14 seed. In the other 14 games, Newington was ranked 16th or worse.

That‚Äôs why when Aby Flores converted a big layup in overtime, which gave the Indians a slightly more comfortable four-point lead at the 1:03 mark, it drew a strong emotional reaction from Trancedi on the sidelines.

When Flores‚Äô shot went through the hoop and the Shelton defender was whistled for a foul, Trancedi slapped his hand hard off the floor in elation. Or maybe it was in relief.

‚ÄúIt‚Äôs been in the back of the coaches‚Äô minds,‚Äù Trancedi said of the postseason skid. ‚ÄúI don‚Äôt think the players thought much about it. I didn‚Äôt want to put any pressure on them because we‚Äôre a different team than those other teams. I‚Äôm glad we could break that [drought]. It‚Äôs just survive and advance, and we‚Äôve got to get ready for Friday and our next opponent.‚Äù

With such pressure to end the long, disheartening streak, it‚Äôs hard to blame Trancedi for such a reaction. That‚Äôs especially after the Indians blew a 27-16 second-half lead that required a game-tying 3-point play from Frazier in the final moments of regulation to avoid an early exit.

‚Äú[The losing streak] might‚Äôve crossed my mind once or twice, but as a coach you‚Äôve got to stay focused on the positives and what we can do, strategy-wise,‚Äù Trancedi said. ‚ÄúWe executed at the end to keep ourselves in the game, and then in overtime we had enough time to edge them out.‚Äù

The victory sets up a second straight postseason home game, nearly unheard of for this Newington program, for the Indians (21-4) against No. 10 Glastonbury (16-5) at 6 p.m. tonight.

‚ÄúI saw [Glastonbury] play,‚Äù Trancedi said. ‚ÄúThey‚Äôre a tough team. They‚Äôre very guard-oriented and they run some really good stuff. Very similar to E.O. Smith in that respect, I think. It‚Äôs gonna be a tough matchup for us, but the good thing is we‚Äôre gonna have more of our depth back [tonight]. That hurt us a little bit [Tuesday], lack of depth. It‚Äôs gonna be a good matchup.‚Äù

The depth he refers to is the expected return of starters Karissa Zocco and Alexie Armour, who missed the last three games - including the CCC title game loss to E.O. Smith - due to injuries.

Trancedi and the rest of the Indians are hopeful their return will be a big boost to the on-court product, as well as being an addition in morale and confidence. Because even though Newington survived without the two, sporting a 2-1 record over those past three contests, the victories haven‚Äôt exactly been breathe-easy triumphs.

‚ÄúI‚Äôm just happy we advanced. It‚Äôs a little bit [of a weight lifted],‚Äù Trancedi said. ‚ÄúWhen we were coming down to the end, it was iffy. We were down three with not a lot of time left and Ashanti made a big play. We had two opportunities to finish it off. I‚Äôm glad we finished it off in overtime, but we‚Äôve just got to play better. We‚Äôve got to be better every day. That‚Äôs the message.‚Äù