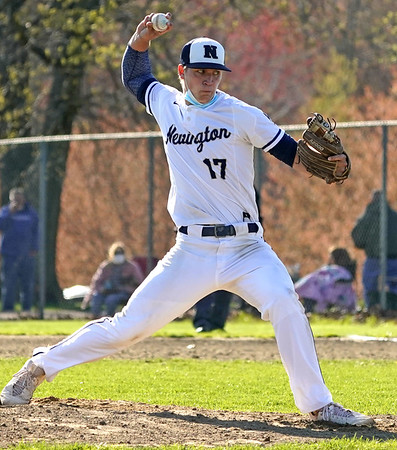 NEWINGTON ‚Äì Zach Nakonechny is Newington baseball‚Äôs undisputed ace and on Friday, the senior showed why.

Nakonechny was dominant for the Nor‚Äôeasters, striking out 13 South Windsor batters over six innings of work, in Newington‚Äôs 7-2 win.

Nakonechy started the game fanning six of the first seven South Windsor hitters in innings one and two. The visitors scored one run in the third after recording a couple of hits, but Nakonechny then set down three of the next four on strikes.

‚ÄúHe showed three pitches effectively [Friday],‚Äù Alaimo said. ‚ÄúObviously the fastball is really good, in the mid and upper 80s, but he compliments it with a curveball and a split-fingered, that he‚Äôs actually developed over the past year and he actually got a few strikeouts on that today. [It was a] very nice outing by him.‚Äù

Nakonechy showed confidence in his off-speed pitches on Friday, particularly when his command with the fastball was struggling. The righty caught multiple South Windsor batters leaning with his curveball, specifically, throughout the contest.

‚ÄúFor a guy who throws 87, you‚Äôd think he‚Äôd kind of just throw a bunch of fastballs,‚Äù Alaimo said. ‚ÄúHe wants to be a pitcher and not just a thrower and he‚Äôs working hard to do that and I‚Äôm really proud of him.‚Äù

Because of Nakonechny, South Windsor managed just two hits, leaving some other Nor‚Äôeasters with a less busy afternoon in the field.

‚ÄúThey really didn‚Äôt put many balls in play today,‚Äù shortstop Alex Cappellucci said. ‚ÄúIt was tough to not fall asleep in the field, but he did a hell of a job.‚Äù

From watching him, you wouldn‚Äôt know Nakonechny missed a full high school season. As a senior, Nakonechny couldn‚Äôt compete as a junior in 2020 because of the covid-19 pandemic, but did have some previous varsity experience to lean on heading into 2021.

‚ÄúHe pitched a little bit for us as a sophomore,‚Äù Alaimo said. ‚ÄúBut we have high expectations for Zach. He‚Äôs a senior this year, he‚Äôs our captain, he‚Äôs committed to Southern and he‚Äôs worked very hard in the offseason with his father because he didn‚Äôt have a junior year. He would have been one of our main pitchers as a junior but unfortunately he didn‚Äôt have it.

‚ÄúHe only gets his senior year, it was obviously sad for him and for everybody, especially the seniors that didn‚Äôt get to play last year. But ‚ÄòNak‚Äô as we call him, has taken advantage of his opportunities.‚Äù

With the schedule only getting tougher, the Nor‚Äôeasters will likely go as far as Nakonechy can take this relatively young squad. Nakonechny is one of only three seniors on the team and the only one who slots into the starting lineup.

In 2019, the Nor‚Äôeasters finished 14-6 before falling to No. 8 Enfield in the second round of the Class LL state tournament.

‚ÄúWe‚Äôre going to keep fighting, keep grinding every day and hopefully at the end of the year enough hard work and daily grind will pay off with a bunch of wins and we‚Äôll see where we land,‚Äù Alaimo said. ‚ÄúI don‚Äôt like to get too far ahead of ourselves.‚Äù