Roundup: Bristol Eastern, Central softball goes down to the wire in extras 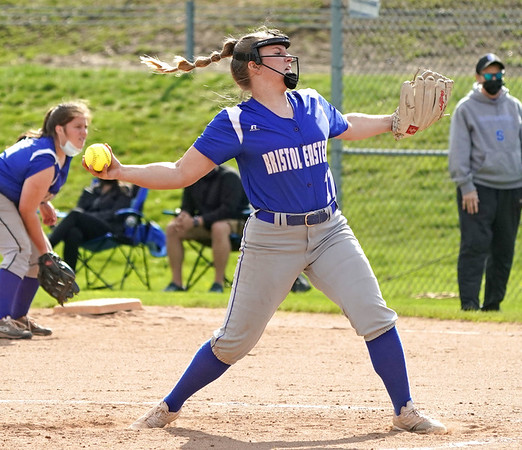 Ali Tellier pitches during a game against Southington. | Dan Heary Buy this photo
Published on Thursday, 6 May 2021 21:02
Written by

BRISTOL – Bristol Eastern and Bristol Central went to extras Thursday evening, but a Jazmyn Browne walkoff single ended the contest in the eighth as Eastern edged out a 2-1 win.

Scoreless until the eighth, Central scored the first win of the game to put pressure on Eastern.

A leadoff single by Sam Policki put the tying run on, and a Jasmine Perez sacrifice bunt put Policki in scoring position.

Riley Giblin grounded out for the second out of the inning. With two outs, Janessa Gonzalez scored the tying run with an RBI single and moved over to second on the throw home to try and gun down Perez.

Ali Tellier improves her win-loss record in the circle to mirror her team’s record at 5-3. She struck out five in the win.

Innovation 30, Weaver 20: The Ravens earned their first win of the season in this explosive offensive contest.

Kaylee Dobranksy powered Innovation as the senior belted a double and grand slam for eight RBIs in the game.

The Ravens recorded runs in every inning, including 12 in the fourth. Innovation finished with 11 hits through the five-inning matchup.

New Britain jumped out to a 2-0 lead after the first inning, before adding four more runs in the second and six runs in the fifth.

Elian Collado and Chris Gibbs each brought in three runs for the Hurricanes, with Collado contributing a team-high two hits in the victory. Willis Estranza, Ryan Lipinski and Nate Kumm also grabbed hits in this one.

On the bump, Vin Borghese earned the win with five innings of work, striking out four and walking one. He allowed nine hits and had three earned runs.

Jacob Balawksi was the kills leader for Newington, racking up 10 kills with 11 assists. He also had four aces from serve.

Also successful from serve was Trey Guest, tallying four aces. He had six kills to his name.

Sean Stegmaier and Will Lubas each had three kills. Stegmaier blocked three shots and Lubas had four digs.

The win for St. Paul improves it to 7-0 on the season. Matthew Downes was the medalist, shooting a two-over-par 37.

Brandon Frye was one off Downes’ pace, shooting a 38. Chris Millerick shot a 42 and Francesco Vesci scored a 53.

The medalist for the evening was Jordan Schaer, scoring a 46 for Wolcott Tech.

Goodwin’s four scorers were led by Christian Molina, who shot a 57. Julien Stepien shot a 58 and Nate Berube shot a 59, just off Molina’s pace. Janelle Roberts was the fourth golfer of the bunch, shooting a 65.

Berlin took home the medal with Kenna Roman shooting 2-over par at 38. Libby Dunn ended her day with a 41, Rachel Varley ended with a 52 and Molly Brett ended her evening with a 53.

St. Paul’s Erin Downes led in scoring for her team, shooting a 46. Sami Millerich was the next lowest at 49. Olivia Dahn shot a 50 and Quinn Burns ended her day with a 56.

Cheshire’s Sydney Hidalgo was the medalist for the meet, shooting a 45.