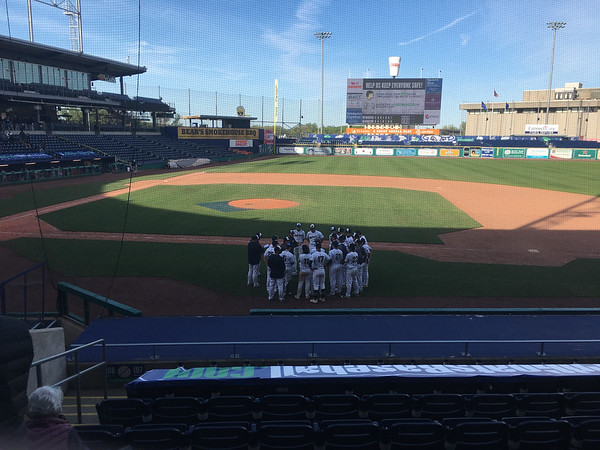 Newington baseball huddles up after its loss to Wethersfield at Dunkin Donuts Park. | Ryan Ames Buy this photo
Published on Thursday, 6 May 2021 21:06
Written by Ryan Ames

The Nor‚Äôeasters allowed two runs in the first inning and never caught back up in its defeat to the Eagles.

‚ÄúObviously we want to win every game we play, but at the same time we understand that it‚Äôs a marathon, not a sprint,‚Äù Nor‚Äôeasters coach Ben Alaimo said. ‚ÄúIt‚Äôs our ninth game of the year, we‚Äôre looking to win the 25th, so although we hit a speed bump today, our objective is to continue to get better every time we go out.‚Äù

Stout pitching from Wethersfield‚Äôs Matthew Fletcher and Newington‚Äôs Zach Nakonechny kept the contest low scoring as the two teams combined for 10 hits during the matchup.

Fletcher went six innings and surrendered four hits for two runs while Nakonechny lasted 6 and 1/3 innings, giving up four hits and three runs along the way. Nakonechny struck out a game-high 12 batters, while Fletcher finished with six strikeouts.

‚ÄúZach was terrific, as he has been all year,‚Äù Alaimo said. ‚ÄúHe‚Äôs our ace and he‚Äôs our horse. We‚Äôre going to ride him as far he can take us.

‚ÄúAt the same time you got to give credit to Matt Fletcher on the other side,‚Äù Alaimo said. ‚ÄúHe pitched so well and Coach [Mark] Bagdasarian does a terrific job with his team. They were super prepared, they played with great energy, they executed. They really didn‚Äôt make many mistakes, or allow us to get anything going. Every time we thought we had something, they made a great pitch or made a great play and shut us down in the big spots.‚Äù

An RBI single from J.T. Gallinoto cut the Eagles‚Äôs lead to 2-1 in the third inning, driving in Connor Daly who reached base with a walk. The Nor‚Äôeasters could have extended the scoring, but a baserunning mistake down the third-base line from Nakonechny ended the threat in the third.

Wethersfield‚Äôs Noah Terzo pushed the visitors to 3-1 during the fourth with an RBI double to left-center, scoring Anthony Pretter.

A missed fly ball from the Eagles brought Newington back to within one during the fifth inning, but Wethersfield added an insurance marker in the seventh on a RBI single from Savier Page.

Brendan Zaleski closed the door for the Eagles on the mound in the final inning, striking out Nor‚Äôeasters Alex Cappellucci to end the game.

Gallinoto concluded as the only batter on either side to compile two hits.

‚ÄúCan‚Äôt say enough about J.T.,‚Äù Alaimo said. ‚ÄúAnother sophomore, second baseman, came this year and has really just outshined any expectations that I had for him as a first-year varsity player sophomore. He made a phenomenal backhand play today and threw the ball to first on the run. Combine that with a couple tremendous at bats with two hits, he‚Äôs done that all year. It shouldn‚Äôt surprise anybody at this point that he‚Äôs hitting in our four-hole in what is usually a very potent offense.‚Äù

Save for a shaky first inning, the Nor‚Äôeasters played well as they scattered six hits over the course of the game and only gave up four hits to the Eagles.

‚ÄúBeing in situations like today, which has a terrific tournament atmosphere, at what I think is the best facility in Connecticut, against a rival team, in a tight game is exactly what I want my kids to experience,‚Äù Alaimo said. ‚ÄúWhether we won it or lost it today, I think we took away invaluable experience that‚Äôs going to benefit us as we pursue our 25th game of the year.‚Äù

Newington (6-3) will get right back on the diamond when it travels to East Hartford on Friday with first pitch set for 3:45 p.m.