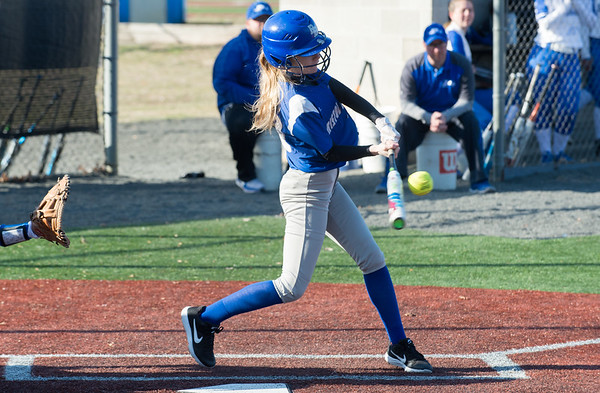 Jasmine Perez connects on a pitch during the 2019 season for Bristol Eastern. Wesley Bunnell | File Buy this photo
Published on Monday, 10 May 2021 21:14
Written by

Jazmyn Browne had four RBIs and Jasmine Perez had three RBIs, with Perez going 3-for-4 and Browne ending 1-for-1. Janessa Jonzalez was a perfect 3-for-3, driving in two runs.

In the circle, Ali Tellier K’d 11 batters across five innings of work for Eastern. She was also 1-for-2 at the plate with three runs scored and two walks.

New Britain had one hit, walked once, and had three base runners all evening.

Newington got one hit from Macy Guion. Jaelyn Gonzales surrendered five hits in the circle.

Jacob Baclawski and Sean Stegmaier each had nine kills. Baclawski had 12 digs while Stegmaier had two blocks.

Windor scored two in the first inning, getting a two-run home run from Isaac Rosario to give Windsor a 2-0 lead before Eastern has its first swings.

In the third inning Windsor socred six times to jump ahead 8-0, taking advantage of two errors, two walks and a hit batter. In the fourth, Eastern allowed seven unearned runs on only three hits.

Ryan Fradette, Trevor Nohilly and Jaydon Churchill each had hits in the loss.

Wilcox’s Cole Maluszewski and Colin Fletcher shared the medal, both shooting a 46.

Goodwin’s Christian Molina shot a 51, leading his team. Isaiah Martel scored a 56 while Julien Stepien shot a 59. Nate Berube rounded out the scoring with a 65.

Madison Massaro-Cook shot a 41, going home with the meet-low score and a medal.

Along with Massaro-Cook in the 40’s was Tori Tolisano, shooting a 47. Glorianne Pinote shot a 51, Chantelle Alvizo shot a 61 and Raechel Bouchard shot a 66.

The low score for New Britain was Abby Olson, who shot a 66. Faith Gibson was right behind her with a 68, and Kim Beslanga scored a 75 for third lowest on the team.

Julia Smith was the medalist for the evening, bringing home hardware for Plainville with a 41. Berlin’s Libby Dunn and Kenna Roman each scored a 42, which were the leading numbers for Berlin.